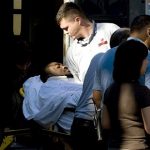 The NFL has awarded a $113,000 grant to the Miami Project to Cure Paralysis, which played a role in Bills tight end Kevin Everett’s recovery from a serious spinal cord injury.

The NFL steadily funded the University of Miami-based center from 1986 to 2003 before cutting off funding altogether about two years ago. NFL spokesman Greg Aiello said grant approval came at the league’s charity board meeting in October.

“It’s a step in the right direction,” Miami Project co-founder Dr. Barth Green said. “It means that they acknowledge what we’ve done for Kevin. So we’re thrilled to have our foot in the door. And maybe it’s an opportunity to work more with them.”

Green was used as a consultant by Bills doctors shortly after Everett was hurt while making a tackle in Buffalo’s season opener against Denver on Sept. 9. Everett was paralyzed from the neck down, and doctors feared he’d never walk again.

Everett has since made a remarkable recovery. He’s now walking on his own while attending a Houston rehabilitation center as an outpatient.

The Miami Project was credited for helping in Everett’s recovery when Bills doctor Andrew Cappuccino immediately placed the player into moderate Hypothermia as he was carted into an ambulance. Cappuccino learned of the experimental method to limit swelling and inflammation at a Miami Project seminar.

Cappuccino continued consulting with Green on Everett’s status until the player was transferred to Houston two weeks after he was hurt.

Green is elated by Everett’s progress, and believes it emphasizes the need for further research into treating patients with spinal cord injuries.

“It’s kicked us into gear,” Green said. “Hopefully, it’ll be a catalyst for all of us to look a little harder inside ourselves and see what we can do about making this available quicker and to more people.”

While the NFL had ceased funding, the Miami Project continued to receive annual grants from Bills owner Ralph Wilson, who is one of the center’s top benefactors.

Green said he’s been invited to speak at a meeting of NFL physicians in February.

‘I decided to have a recovery’: Rhiannon Tracey’s next big step