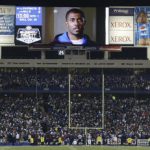 Bills tight end Kevin Everett has been released from a Houston hospital to resume his next phase of rehab, 10 weeks since sustaining a severe spinal cord injury.

“While this news is a significant milestone for me, I still have a long journey to full recovery,” Everett said in a statement released Sunday by Houston’s Memorial Hermann/TIRR, where the player spent the past two months in rehab.

It was unclear when this week he was released, but Everett will continue his rehab at the facility as an outpatient.

Everett returned to his home in Houston in time to watch the Bills play host to the New England Patriots on Sunday night.

In a surprise, Everett delivered an inspirational message to his teammates and fans before the game.

“How are you doing, Buffalo? This is Kevin Everett,” he said in a taped message broadcast on NBC and the Ralph Wilson Stadium video scoreboard. “I just want to say, ‘Come on, let’s beat the Patriots.'”

The sellout crowd watched in silence and then broke out in a wild cheer after the 25-second clip was broadcast before the opening kickoff.

Except for releasing statements through news releases, the comments were the first Everett has made publicly since he was hurt while making a tackle covering a kickoff during Buffalo’s season opener against Denver on Sept. 9.

He has made significant progress since he was carried off the field paralyzed from the neck down, and after doctors initially feared he’d never walk again.

Besides moving his arms and legs, Everett has developed enough strength to hold himself up briefly on a walker, and has also been using his feet to push himself around in a wheelchair.