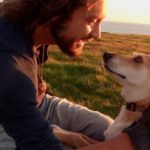 We take so much for granted, but there are those around us who make us feel comfortable with the world no matter what it may throw at you.

I believe that thought popped into my head the very first time I met Andy Janicky, and it certainly was confirmed after a long conversation with him recently about his nonprofit, Wheels to Water.

In 20005, midway through his college career at University of Wisconsin Stephens Point, he experienced an injury that left him a quadriplegic. With the help of his mother and aunt and a strong network of supportive friends, Janicky rehabbed and finished his last two years of schooling with a degree in Biology/Water Resources.

“Luckily, I’ve always been patient, and that has been my saving grace,” he said.

Having always been an active fellow — competitive swimming, snowshoeing, camping — he began to look for not only work but activities that would get him back in the wilds he loved so much. With such a severe injury, that’s a steep hill to climb, literally.

Fortunately, an opportunity opened at the Wisconsin Department of Natural Resources, which covered over 50 parks. He worked with park managers to make sure they were compliant with ADA laws.

At some point, he was invited to take a canoe trip on Lake Powell for several days.

“It was so much easier to get around on the water!” he told me.

While his body from his collarbone down is paralyzed, he has use of his biceps and therefore can propel himself in his wheelchair and transfer himself into the seat to drive his adaptive van.

Janicky became friends with an engineer who happened to have been approached by a canoe/kayak company to make adaptive alterations to their crafts, mainly, a more substantial seat that could be clamped into a canoe. They then put them into a kayak, as well, added a small outrigger setup in the back for more stability, and a whole new world opened up. He fell in love with the sport and the freedom it allowed.

“The seat is the thing, without control of your trunk, it’s hard to stay upright so these wrap around a bit more,” he said. “I thought that was so rad, I just really wanted to share it with others. When you’re injured, you enter a completely unfamiliar world, so any way I could help folks with different abilities adjust, well, what a great way to do that.”

His goal then was to get adaptive kayaks into the parks.

But, after two winters in the extreme Wisconsin weather, he realized snow was not very conducive to wheelchair use and started looking to Los Angeles with his then wife, who was an artist who had already started looking there and felt that area may benefit her work. Janicky started work with the L.A. County Metro Transit Authority in the Civil Rights Department regarding compliance and designing stations to not only make them accessible but also to incorporate “universal design” to make things usable for everyone.

During his five years in L.A., he was a peer mentor and life coach at Rancho Los Amigos, a rehab facility.

True to his kind and patient nature, he started a program called Night Shift.

“I got close to people I would never have had an opportunity to before,” he said. “Daytime, many of these guys never received visitors and would just hold up in their rooms. So, this was a way to get them out and talking to each other. It went really, really well!”

Then his idea of Wheels to Water he’d had back in Wisconsin found a way to take shape.

He was able to start booking trips with the adaptive kayaks in marinas, harbors, any sheltered spot.

Janicky’s relationship status changed, and he felt compelled to find somewhere more beautiful than the overpopulated Southern California waterways. He headed north and discovered Morro Bay. However, accessible housing and affordability drove him to Cambria.

He also discovered that running a nonprofit was a lot of work, and his core of volunteers had been left behind, so currently it is all on hold until his project can regroup. Currently, Janicky has hooked into an opportunity through Cal Poly, where he participates every quarter in the Adaptive Paddling Program.

If you would like to find out more about his program or maybe help him with any of his projects, you can check out his website at www.wheelstowater.com

By: Dianne Brooke, The Cambrian.