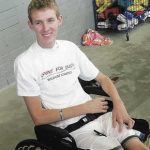 VERSAILLES –For Dusty Hicks, senior year was going to be huge.

Other kids may get hyped about prom or graduation parties. In his final year of high school, Dusty was going to be all about the book.

By the time he was through, he was going to write his name in the front, the middle and the back of the Woodford County High swim team record book.

From the time he started swimming as a 3-year-old, when Dusty Hicks hit the water, good things — winning races; building a name — happened.

Until the day this past summer when Dusty hit the water and everything went stunningly wrong.

He was lying face down in a pond on the family’s Brookstown Farm. Try and try again, he could not lift his face out of the water.

Because he couldn’t move at all.

Even a competitive swimmer’s capacity for holding his breath gives way eventually. Face down, his body acting against his will, Dusty took in a giant breath.

The water filled his lungs.

Inexplicably for someone staring into the bottom of a farm pond, Dusty Hicks started to see a bright white light.

The Fourth of July is a day for families. Judy Hicks, her daughter Kristi and son Dusty were taking full advantage of July 4, 2007. In the early afternoon, they went for a family horseback ride on the south side of the family’s 525-acre horse farm.

It was one of those steamy Kentucky summer days, the air thicker than grandma’s sorghum.

Dusty was riding a 20-year-old quarter horse named Sid; Judy sat astride Dooley, a 17-year-old gelded Arabian; Kristi was riding Eddie, a thoroughbred and the youngster of the bunch at 15.

Riding across the farm, the three came across a pond that R.W. Hicks, Judy’s husband, the children’s father, had dyed an inviting tropical blue.

So inviting was the deep blue of the water, it was like coming across an oasis in the Mojave. Of course a swimmer would want to take a cooling dip.

A mother being a mother, Judy couldn’t help herself. “Dusty, you don’t know how deep this is. Don’t dive hard. Be careful.”

He knew he was in trouble the moment he hit the water.

Just relax, everything will come back, he told himself.

His brain sent out the signals — swim, turn over — move, just move.

The body would not comply.

On the pond’s shore, Dusty’s mom and sister watched him founder.

That Dusty, always a cutup.

Except, as the milliseconds passed, he still didn’t turn over.

This had stopped being funny.

In the water, Dusty took in that deep breath of water. He says that white light — the mysterious white light described by many who have experienced near-death situations? — appeared before his eyes.

Just as he was about to breathe again, Dusty felt his head moving out of the water.

How many little sisters get to save an older brother’s life? Dusty’s then-12-year-old sis, Kristi, had gone in the water and turned her brother’s body over onto his back in the pond.

Kristi pulled her brother through the water over to the bank, where his head could be on land but his body still in the water.

Dusty was conscious. “Mommy, I hurt my neck and I can’t move,” he said.

Amazingly for a trio that included a teen and a near-teen, no one at the pond was packing a cell phone.

Jumping on Eddie, the thoroughbred, Judy rode like Annie Oakley across her farm toward the nearest road.

She flagged down a woman driving a dark Volvo with two kids in the back seat.

“My son, he dove into a pond, he’s hurt bad, he can’t move and we need an ambulance,” Judy said.

Taking out her cell, the woman dialed 911.

There were times in the next 10 weeks, spent either in a hospital or a Rehabilitation facility, “when I really wished I’d died in that pond,” Dusty says.

This was after a neurosurgeon came into his room at the University of Kentucky hospital and started using words like “incomplete spinal cord injury” and “compact fracture of the C-5 vertebra” in the neck.

Scariest of all, it followed the phrase “extent of the damage not known.”

Within weeks, Dusty had undergone two surgeries, including the insertion of titanium plates in the front and back of his neck to stabilize the damaged area.

The challenges just kept mounting. There were two severe bouts with pneumonia. He developed a swallowing disorder that caused doctors to perform a tracheotomy. He had a severe bedsore on his back that lingered for months.

What had been the tautly muscled, well-conditioned body of a competitive swimmer wasted away. The day of his injury, Dusty Hicks weighed 160 pounds. Within weeks, he was down to 122.

Like many who suffer spinal injuries, Dusty battled a gloom bordering on all-out Depression.

His emotional low point might have been when he was transferred from the UK Hospital to Cardinal Hill Rehabilitation Hospital.

“Some of the videos they show you are like you’re going to be stuck in this (wheelchair) for the rest of your life,” Dusty says. “That really bothered me.”

For everything that went wrong, Dusty’s family tried to get him to hang on to what were initially small signs of hope.

Even before he left UK, Dusty had slight movement returning in both arms. Even when he had little to no movement in any extremity, he says he always felt sensations in all four.

One day at Cardinal Hill, one of his physical therapists was putting him back in his wheelchair when Dusty felt “something in my right leg,” he says. “He asked me if I could move my right leg.”

With great exertion, Dusty moved his knee. A little bit. “It was better than any medal I ever won” for swimming, Dusty says.

In the water, Dusty Hicks has long been used to racing against the clock.

Now, in a sense, he faces the same challenge with dramatically higher stakes.

With an incomplete spinal cord injury — meaning that the victim retains some feeling and, likely, some movement below the point of injury (in Dusty’s case, his neck) — there is hope for recovery.

But there is no guarantee.

Dr. Ed Hall, director of the Spinal Cord and Injury Research Center at the University of Kentucky, says the first six months after a significant spinal cord injury are often crucial.

“Usually, whether an injury is incomplete or complete, after six months, everything is pretty much stabilized,” Hall says. “You get to a point where what you see is what you get in terms of recovery.”

Long term, Hall, 57, says that the pace of research on spinal cord injuries — especially incomplete ones such as Dusty’s — is such that “I expect to see a significant breakthrough on restoration in my lifetime. Now, that’s assuming I live into my 80s.”

For now, Dusty’s parents are trying to tap their horse industry contacts to raise money for an advanced locomotor treadmill for Cardinal Hill. They are exploring sending their son to the Shepherd Center in Atlanta, one of the nation’s premier neuro-recovery facilities.

Exactly four months from his injury as you read this, Dusty is still not able to walk. He does have some movement in all extremities.

Just recently, he’s been able to pick up a bottle of Ale-8-One and drink it himself.

Finally, his bedsore healed enough to allow him to begin rehabbing in the Cardinal Hill swimming pool.

From the time he was a toddler, he’d been as at home in water as a dolphin is in the sea.

Now, being back in a swimming pool served as a stark reminder of how different his life is — how different he is — from the last time he’d entered a pool.

This won’t be the senior year Dusty Hicks envisioned.

The regional championships he won last season for Woodford County in the 100 meter butterfly and 100 meter backstroke will go undefended.

If he’d been healthy, “there’s no question he’d have been a high Division I (college) prospect,” says John Brucato, a University of Kentucky assistant who coaches Dusty in the Wildcat Aquatics swim club.

“He may not have been able to (swim) at Stanford (an elite national power), but he definitely had the times to go to a Kentucky or a big school in a big conference.”

Before his injury, the A student’s life goal was to become an orthopedic surgeon. Now, uncertainty dictates Dusty’s future. If he recovers fully, he could still become a surgeon.

If he doesn’t, he could be a doctor specializing in research. For obvious reasons, surgeons need precise hand and arm movements.

In his own mind, he’s gone over his accident a gazillion times. Dusty doesn’t believe he hit the bottom of the pond. He recalls having once felt a similar numbness when he dove into the water in a swim meet. He wonders if that foreshadowed what was to come.

At a time in life when most teens are dealing with homecoming dates and picking colleges, Dusty is working through an array of complicated emotional issues brought on by his injury. Dusty worries about being seen only as “the guy in the wheelchair.” He hates feeling like a burden to his friends.

Yet he’s also keenly sensitive about people who he thought were close to him who haven’t been around much since he got hurt.

“Some of the kids, they just can’t handle what happened,” Judy Hicks says.

Says Dusty: “You find out who your real friends are.”

One night, his buddies Trent Goodin, Rob Cleveland and Jill McGregor took Dusty to a restaurant for a game night. The four tied for first in a trivia contest.

With a $25 gift certificate riding on the outcome, arm wrestling became the tiebreaker. Before his accident, Dusty knew he’d have been his team’s chosen gladiator.

That realization of what would have been turned a night of fun into sadness. He calls those his “wheelchair moments.”

Some nights, he dreams that he still is as he was before he dove into that pond. The dreams are so vivid that, when he wakes, he tries to throw his legs out of bed like before.

When he can’t, the frustration is almost like living through the accident again.

Now, rather than rewriting the record book in Woodford County swimming, Dusty has a new goal for his senior year.

He fantasizes about being able to regain the ability to walk, but keeping it a secret from the rest of the Class of 2008.

Then, on graduation night, Dusty would rise up out of his wheelchair and stride across the stage to pick up his diploma.