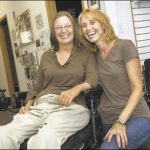 The dining room table in Angie Plager’s living room is taller than most. So is her computer desk. The furniture is arranged along the walls of her parents’ Cambridge home, with no obstructions in the middle of the rooms.

The back door opens by remote, to a ramp overlooking a large yard in rural Iowa.

Plager, 24, and her parents modified the home following a car accident in 2003. Her car slid under a semi trailer, leaving her a quadriplegic.

This year Plager planned the Adapted Cycling and Kayaking Clinic, which takes place next weekend at Raccoon River Park, where she will demonstrate that modifications following a spinal cord injury are not limited to doors and ramps.

The event features recumbent bikes, modified so people pedal with their hands, and kayaks with the paddle mounted on a pole. People with spinal cord injuries can also learn how to become involved in golf, karate, rugby, hunting and other sports.

Plager first attended the event in 2005. The next year she helped plan the expo and became a Spinal Cord Injury Association board member. This January, she was named chapter president.

The 2003 accident shattered the fifth disc of the Cervical Vertebrae in her neck. Doctors had to fuse discs four, five and six together. She was left with no feeling below her armpits, and diminished use of her arms.

She was forever changed, but her thirst for life remains.

Plager was studying business at the time. Last May, she completed her degree at DMACC. She was the runner-up in last year’s Ms. Iowa Wheelchair competition. She’s spent part of this year lobbying for Iowans with Disabilities in Action. Plager is also the drama ministry director at her church and the parade director for the Cambridge Jubilee Celebration.

“Basically, I’m a planner,” she said. “I’m on the computer all day, lining up equipment, finding bikes and working on fundraising.”

Plager can drive her own specially modified van, but is unable to refuel it herself, limiting the distance she can drive alone. Plager and her mother, Becky, are working with a Florida company to create a fuel pump that would make it possible for the disabled to pump their own gas.

“It sprang out of my own desires, but if I can make life a little easier for someone else, it’s all the better,” Plager said.

She’s a lifelong fan of Harley Davidsons, and hopes that someday a motorcycle could be modified to accommodate her. She continues to gain new experiences – on a recent trip she water-skied and jet-skied. And there’s another long-time goal she hopes to soon accomplish.

“I’ve been wanting to skydive since I was 13,” Plager said. At the national meeting for the Spinal Cord Injury Association she met two quadriplegic jumpers from New York. She hopes to visit and make a jump herself.

“It’s kind of weird for me to be trying all these things I hadn’t done before, because I never thought of myself as a risk-taker,” she said. “But hey, if it’s available, why not give it a try?”

We have to overcome this hope barrier