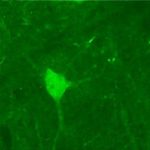 Molecular light switches are a fairly recent technological advancement that allows scientists to selectively activate cellular function using a light source, which in turn allows for more control when conducting biological experiments. The therapeutic potential of light switches is that they may be a good option to regulate muscles in paralyzed patients such as the diaphragm for breathing or the detrusor for bladder control.

The molecular light switches contain a gene for a light-sensitive protein derived from algae, called channelrhodopsin-2, as well as molecular instructions that limit its expression to a specific subset of cells. The gene is delivered to the target tissue via a virus, much like in gene therapy.Once taken up into the cell, the DNA triggers production of a protein that activates the cell when exposed to light.

Last year, Silver [Jerry Silver, neuroscientist at Case Western and president of LucCell] and his collaborators showed that channelrhodopsin could be used to restore breathing function in paralyzed rodents. Researchers first recreated a high-level spinal cord injury in rodents, paralyzing half of the diaphragm. They then injected the switch into the spinal cord, near the nerves that control the crippled muscle. Shining light on those cells triggered muscle contractions in the diaphragm. “The paper shows remarkable recovery of breathing function on the side of the animal with impaired function that lasted for a day even after light was turned off,” says Silver.

Paralyzed Bride Is Going To Be A Mom With Help Of...