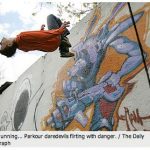 YOUNG daredevils are flirting with disaster for the entire world to see in an alarming new wave of “Free Running” footage that is making its way onto YouTube. Based on the French sport parkour, free running is the latest extreme

sport to hit Australian shores, and has been described as the “art” of defying gravity by leaping off or between concrete buildings at great heights.

There are no safety harnesses, no nets and certainly no emergency services on standby; with teens as young as 15 and 16 competing to see who is brave enough to leap from the greatest height.

The footage of young people leaping off school roofs, out of trees, and off the second level of two-storey car parks at locations in Sydney, the Central Coast, and Newcastle has sparked fear among health professionals, who say the dangerous hobby could cause permanent damage.

“There’s no doubt that falls are the leading cause of head injuries here, and I assess kids who get brain injuries all the time, but we don’t always find out what led to the fall,” head of psychology at Sydney Children’s Hospital and Randwick Dr James Donnelly said yesterday.

“I think the allure is that is free running – it’s unrestricted fun and it doesn’t necessarily follow any rules.”

He said youth were participating to either show “physical mastery”, to engage in risk taking or to show their individuality.

Paraplegic and Quadriplegic Association of NSW CEO Max Bosotti said an adrenalin rush of a few seconds could easily result in a lifetime in a wheelchair.

“It is clearly an understatement to say that somersaulting off the second storey of shopping centres is a dangerous activity and the risks of permanent injury are extremely high. The spinal cord has the consistency of toothpaste it’s so fragile that even bruising can cause an irreversible spinal cord injury,” he said.

More concerning, Mr Bosotti said, was the fact the youths appeared to be competing in terms of who could push the boundaries the most.

The YouTube footage has been met with hundreds of online responses from young people, who urge one another to “try better”.

Parkour Association of Australia member Kenny Yuegn said the rise in free running videos could be attributed to recent films and ads.

They include Casino Royale, which shows the world’s foremost free running expert, Sebastien Foucan, escaping 007 by launching himself through a complex construction site; and a MacDonald’s ad which depicts Parkour Association of Australia president Matthew Campbell jumping off buildings to get breakfast.

While Mr Yuegn said there was an element of danger, he said the association promoted proper training and often hosted training sessions.