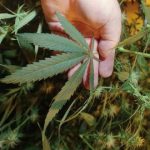 NEW YORK — A diving accident more than a decade ago landed Mark Braunstein in a wheelchair. Though he can walk with crutches, he is paralyzed from the knee down and still suffers from pain and spasms.

His solution gets packed into a pipe.

“In the spinal cord injury ward was when I first heard in the grapevine about marijuana being very good for alleviating the spasms and the accompanying pain… it is actually the only drug that address both,” Braunstein said.

Braunstein is one of a number of people who convinced both the Connecticut House and Senate to pass legislation to legalize the medicinal use of marijuana.

“The patient and his or her primary caregiver would register with the Department of Consumer Protection and then would be permitted to personally grow up to four marijuana plants no bigger than 4 feet in heightk,” according to Sen. Andrew McDonald, (D-Stamford).

Twelve other states have already legalized the medicinal use of marijuana, not including New York, New Jersey or Connecticut. Those who support the bill point to a University of Connecticut survey where 83 percent of respondents said they’re in favor of legalization.

Opponents of the bill said that’s not reason enough.

“The bill assumes in some way that this is a better, safer, cheaper therapy than what’s already there. I have no basis, and I don’t know anyone who’s really proven to me that they have a basis for saying that,” said Sen. Bill Nickerson (R- Greenwich).
The final decision lies with Connecticut Gov. Jodi Rell. A spokesman for the governor said she has not yet decided. One of her concerns is that federal law prohibits the sale of seeds.

Among the provisions outlined in the law, patients are forbidden from distributing the marijuana and prohibited from smoking it in front of children.

For the latest news, stay tuned to NBC 30 News and NBC30.com

From the Balance Beam to the State Bar