Someone to lean on 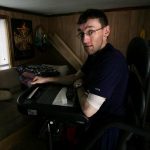 Living with a spinal cord injury is like riding a roller coaster, said Nathan Walters, who suffered an injury that left him in a wheelchair in February 2006.

One of his occupational therapists at the Wyoming Medical Center, Nicole Mussen, worked with Walters and realized she knew other people with spinal cord injuries facing the same ups and downs.

“I thought, let’s ride it together,” Mussen said, explaining why she decided to put together a spinal cord injury support group for people in Wyoming.

The group will hold its first meeting Tuesday, June 5, from 6 to 7 p.m. in the Support Services Building at the Wyoming Medical Center.

By offering support, advice and most of all friendship to others in this group, Walters hopes to stop other Wyoming residents from going into the massive Depression he experienced after his own accident.

“Living in a chair is not the same as living as a normal human being,” Walters said. “Interacting with people in chairs is going to be fantastic not only for me but for other people.”

After being crushed underneath a car he was working on, Walters had surgery at the medical center and then spent about two months at Denver’s Craig Hospital for patients with spinal cord or traumatic brain injuries.

Upon returning to Casper, he struggled to adjust to life as a person with a spinal cord injury in Wyoming. Unlike during his time at Craig Hospital, he didn’t know anyone else in a wheelchair.

Walters said he would have loved to have this support group available when he got back from Denver.

“I would have made a friend who could have helped me through obstacles.” He said he might not have gone through the depression he did.

Family, friends and health care providers are all wonderful forms of support, Mussen said, but nothing compares to speaking to another person with a spinal cord injury.

“That’s where the support group comes in,” Mussen said. “They are available to offer a different perspective. Family can be so emotionally attached that it is hard for them to see the situation.”

This group will offer emotional support, provide problem-solving techniques and give people an opportunity to discuss their health concerns.

Also, Mussen said she is going to try to have a health care provider or service provider in the community present during the first half of every meeting. Mussen hopes to have a 25-year survivor of a spinal cord injury speak at Tuesday’s meeting.

Through this group, Mussen also wants to develop a mentoring program where someone who has been living with a spinal cord injury for a while, like Walters, is paired up with someone who is recently injured.

Mussen expects at least five people with injuries at Tuesday’s meeting, but she said there might be more based on the amount of e-mails and phone calls she has received about the event.

This meeting is open to people all over Wyoming and Mussen said in the future she hopes to offer the meeting through video conferencing to people who are unable to travel.

When asked what he could offer to the group, Walters said “friendship” and he is looking forward to meeting new people like him.

Mussen said to Walters, “What a great opportunity this is to bring meaning to your injury.”