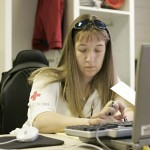 “People have helped me my entire life; I’m tired of that. I want to help people,” 25-year-old Zan Peavy insisted.

On her first disaster deployment away from her home in Florida, American Red Cross volunteer Zan Peavy inputs client casework data from the Georgia tornadoes.

Peavy suffered a spinal cord injury during birth and uses a wheelchair but that doesn’t stop her from helping people. The Tallahassee native is enthusiastic about volunteering for the American Red Cross.

Peavy is a family services volunteer helping Georgia residents recover from the tornadoes that struck on March 1. She meets with families and individuals, listens to their stories and determines their immediate emergency needs. She then provides emergency assistance such as clothing, food and other necessities so they can begin their road to recovery.

Data entry is also a part of her job, which has become her passion.

“I’ve fallen in love with something I can do well and get paid with gratitude,” Peavy said.

Peavy has worked as a 9-1-1 dispatcher and believes her emergency response background complements the Red Cross disaster response. . 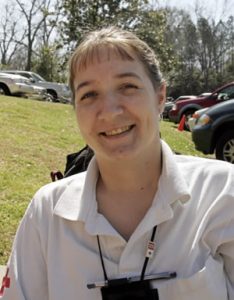 “I love working with people no matter the situation,” she said.

Disaster response can be stressful, but Peavy keeps a level head and calm disposition. She says it’s rewarding to see a client whose life has been turned upside down begin to see that things will get better. The Red Cross helps make that happen.

Peavy, who suffered a spinal cord injury during birth, doesn’t let her inability to walk stop her from helping others. This determined 25-year-old embodies the humanitarian spirit of the Red Cross.
(Photo Credit: Gene Dailey/American Red Cross)

This tornado relief operation is Peavy’s first opportunity to help with a widespread disaster.

“I was really excited when I got the call,” she said.

All the way to Georgia her roommate, a veteran Red Cross volunteer, gave her pointers. Just a few days into the operation, Peavy knew that she wanted to make disaster response part of her future. Long term, she has her sights set on working at Red Cross national headquarters.

In addition to helping people when they need it most, the Red Cross has meant personal growth for Peavy. She admits that she’s become more outgoing since becoming a volunteer in August 2005.

Like thousands of other people, Peavy was moved to help after Hurricane Katrina. A couple of days after the storm devastated a wide area of the Gulf Coast, she found herself in a key role in Tallahassee, helping evacuees with disabilities.

Peavy doesn’t think her inability to walk disqualifies her from making a big contribution. She’s determined to use her abilities as part of an organization that’s been helping people for more than a century.

Zan Peavy embodies the humanitarian spirit of the Red Cross. In addition to helping those in need, she’s eager to be an inspiration to anyone who thinks they have nothing to offer. .

Tracey Keist works for the American Red Cross Grand Canyon Chapter in Phoenix, Ariz. She is on her first national disaster assignment, helping inform Georgia residents of services available through the Red Cross.