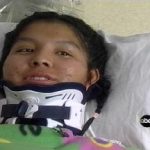 SALT LAKE CITY, Utah – Sledding accidents sent hundreds of people to the emergency room last year, most of them children, and a sledding accident last month in American Fork Canyon forever changed the life of a young Utah college student.

“I broke my neck and then I had spinal cord injuries and stuff,” said 19-year old Sandra Anderson as she lay in a bed at the University of Utah Hospital. Anderson broke her neck while snow sledding in American Fork Canyon on December 23, 2006. “The boy behind me was sliding backwards and hit me from behind and the next thing I remember is just waking up and it was snowing on me,” Anderson said.

Utah kids and adults flock to the snow hills along the Wasatch Front. A little weight in a plastic sled makes for a fun and fast flight. But hospitals around the United States report more than 30,000 snow sledding injures a year, many that require medical attention. “An afternoon of fun can potentially lead to a life altering injury and that is what we would like to avoid,” said Dr. John Speed, a physical medicine and Rehabilitation specialist at the University of Utah Hospital.

The damage to Anderson’s neck and spinal cord leaves the Utah State University freshman paralyzed from the neck down. “Everyone can get hurt, but I would never think that anything like this could come out of sledding,” Anderson said.

Doctors said that while accidents happen people can take precautions like wearing a helmet, sliding in open areas away from trees and cars, using a sled with a steering mechanism, not going down head first and not doing dangerous tricks.

Most people spend a sunny day on the snow hill and go home without ever thinking about the dangers of snow sledding, but Sandra Anderson now thinks about it every day. “It is just something that is life changing and I just have to know that it has happened and I just can’t change what’s happened.” Anderson did move her arms and hopes for more improvement as she continues to recover. She plans to continue her studies at Utah State University in the fall.

Toddler With Spina Bifida Can Now Get Around Thanks to Dad’s...