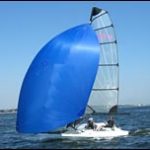 Sailors Allan Smith and Jackie Gay are hoping their new partnership can reap rewards in American waters next week.

The duo have teamed up to compete in the new Skud-18 class which will make its Paralympic debut in Beijing.

And they will make their international debut at the Olympic Classes Regatta which begins in Miami on Sunday.

“Miami will give us a variety of conditions and it is a chance to see what other countries are achieving,” Smith told BBC Sport.

“As it is a new class, we are all learning off each other to get the best out of the boat.”

Smith, from Leeds, suffered a spinal cord injury in a hang gliding accident in France in 1984 and is the more experienced competitor of the pair.

He took part in the single-handed 2.4mR class at the Athens Paralympics, finishing eighth, but was finding it increasingly tough competing against less disabled athletes.

But the introduction of the new double-handed keelboat class to the Paralympic schedule has given the 54-year-old a new lease of life.

“I’ve learnt a lot from my Athens experience and I’m now targetting a medal in Beijing,” he said.

“Being with Jackie means I can concentrate more on the sailing and there are less physical demands on me, which I was finding harder in the single-handed boat.

“I had always looked forward to sailing with someone else and it is nice to have someone else to bounce ideas off and keep you on track.

“When it came to tactics, I was probably guilty of changing my mind too easily when I sailed alone but now I have to justify my decisions and that has improved my skills.”

The two-person keelboat, which will be one of three sailing class to be competed for in Beijing, must include at least one female on board.

Gay, from Birmingham, lost her left leg in an accident but her swift introduction to the international scene has come as a surprise.

Great Britain are hopeful of success in the Skud-18 category

“I had always loved being on boats and I was very keen to get back on the water after my accident,” she said.

“I got involved with the RYA Sailability events but it has been a steep learning curve from being a leisure sailor to being a serious competitor but I’m enjoying it.

“I’m quite nervous about Miami because it is my first international competition since we got together last year.

“But I am looking forward to it and I think that doing well there will help our confidence for the World Championships in America later in the year.

“You have to be fit to crew the boat and I’ve had to start going to the gym to improve my fitness, although I play basketball and swim.

“We bring different personalities and skills to the boat but our skills complement each other and we soom to be working well together as a team.”

Smith and Gay are among a number of Paralympic contenders competing in Miami.

World champions John Robertson, Hannah Stodel and Stephen Thomas will take part in the three-person Sonar category while Helena Lucas and Megan Pascoe will compete in the single-handed 2.4mR category