The company’s stock rose on the news, published in the journal Stem Cells and Development. 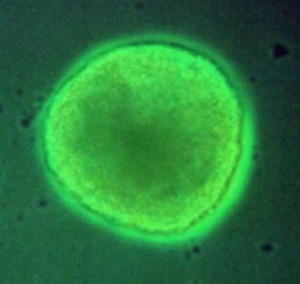 Geron had earlier reported that human embryonic stem cells had helped replace Myelin, a fatty covering on nerves that is vital to function.

Now, the company’s researchers said, they had shown the cells produce multiple nerve growth factors, which are proteins that stimulate the survival and regeneration of neurons.

“In addition to the remyelinating activity as previously reported, GRNOPC1 produces growth factors that can improve the survival and Extension of neuronal circuitry in the spinal cord,” said Thomas Okarma, Geron’s chief executive.

Geron is one of several private companies working with human embryonic stem cells, whose use is controversial. Federal law restricts the use of federal taxpayer money for the research.

Geron has worked to make the embryonic stem cells, which have the power to become any cell or tissue type, develop down certain lines. Its GRNOPC1 stem cells have started down the road to becoming a type of nerve cell called an Oligodendrocyte.

Each protein plays a different role in helping direct the growth of new cells.

“These factors were all produced at physiologically active levels, and each has been reported to have trophic (nourishing) effects on neurons associated with the spinal cord,” the company said in a statement.
© Copyright 2009 2007 The New York Times Company