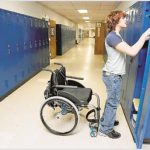 HARTSHORNE — Bobby Graham’s recovery from a paralyzing spinal-cord injury last January has been an example of grace and determination.

The 15-year-old and a friend, Michael Smallwood, 18, were in a near-fatal car crash only a week after another automobile accident took the lives of Hartshorne students Candace Russell, 17, and Mitch Telinde, 18.

Then last month, Tiler Savage, 16, of Hartshorne was killed in a collision on U.S. 270.

It was another blow to a close-knit school community that already had suffered so much. The three accidents had something unfortunate in common: none of the teenagers was wearing a seat belt.

But if something good can come out of a series of tragic events, it is in the way Bobby kept his fighting spirit and smile even when he was grieving the loss of playing football as one would grieve the loss of a family member.

“Our little school has been through a lot, but Bobby’s been our light,” said school counselor Gloria Ward. “He’s had such a good attitude about it, and it’s made other people comfortable with it.”

So comfortable, in fact, that his friends like to sit in his wheelchair while Bobby pushes them.

Every time they see him walking or doing something new, the

students gather around to cheer him on, Ward said.

On Dec. 18, Bobby decided he would walk to his next class instead of using his wheelchair. As he walked at his own steady but slow pace down the hall, his friends refused to whiz by him even when he told them it was OK to go around.

“Right after the wreck, the first thing they said was that I’ll never walk again. I said no way, I’m still going to walk again,” Bobby said.

A burning sensation in his right big toe and a surprising ability to kick his leg one day while in a therapeutic pool several weeks later were encouraging signs.

He started working out at school last summer. By September, he was using crutches some of the time, and his progress picked up from there. Every day, he improves in a painstaking effort to build up his endurance.

Most recently, he accomplished a milestone. He walked for 110 feet. Other feats have included riding a stationary bike and treadmill for 30 minutes.

He also left his wheelchair at home last week to go to a basketball game using only his crutches.

“All of this movement and feeling (in his legs) are a bonus. I was just glad I got to bring him home and didn’t lose him. I’m glad we live in a small town. Without them helping us . . .” said Bobby’s mother, Minda Graham, trailing off.

Minda Graham credits much of Bobby’s physical recovery to the Bedouin Shriners of southeastern Oklahoma, who made it possible for him to receive care at the Shriner’s Hospital in Chicago.

At the Chicago hospital, he met other children and teenagers with spinal cord injuries. Bobby described the facility with one word: “awesome.”

“If I didn’t go there, I wouldn’t be anywhere close to where I am now,” he said.

It was through the Shriners that Bobby became certified in scuba diving and was able to take a diving trip to Florida with other teens. Bobby saw gar, lobster and a shark swimming in the ocean. It was an experience he doubts he would have had if he had not been injured.

“Taking him to the Shriner hospital was the best thing ever. There were other kids there going through the same thing. It did wonders for his self-esteem,” Minda Graham said.

Building up his endurance takes determination and constant physical therapy. Bobby goes to the McAlester Regional Hospital outpatient clinic several times a week and the Shriner Hospital twice a year. He credits sports for getting him through the tough physical challenge.

His father, Donny Graham, coached him in football from third through sixth grades and takes a similar approach in helping him through his recovery.

“He told me he wouldn’t love me any different if I couldn’t walk again, but he said, I want you to know the choice is yours,” Bobby said.

Bobby was 14 at the time of the accident but does not remember anything about it. Michael Smallwood sustained a head injury but survived.

Although he still makes his mother and teachers nervous when he attempts certain things like riding a four-wheeler, albeit not very fast, Bobby admits he now knows he is not invincible.

He is leery of car rides and worries about everything that can go wrong. And he always looks in the back seat to make sure his little sisters are wearing their seat belts.