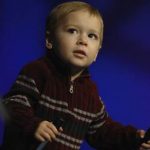 She was at work in Owensboro, and her 2-year-old son, Chase, was at the baby sitter’s. He was jumping up and down on a couch when he fell backward and hit his head on the couch’s wooden arm.

Kids do things like that all the time and bounce right back up. “Unfortunately, that didn’t happen with Chase,” Renee Ford said. Soon, the only thing he would be able to move was his eyes.

The story of Chase’s devastating injury and his remarkable recovery were detailed in a front-page story in The Courier-Journal in June. Tomorrow, Chase, his mother and the doctor who eventually put the little boy back on his feet at Jewish Hospital’s Frazier Rehab Institute are scheduled to tell their stories on ABC’s “Good Morning America.” (The exact time wasn’t announced; the show runs from 7 to 9 a.m.)

Ford, who was 8½ months pregnant at the time of Chase’s accident, remembers it all too well. “The baby sitter called and told me Chase was crying uncontrollably and she couldn’t get him to stop.” She rushed home, held the child and tried to calm him. “What hurts?” she asked Chase. “He tells me it’s his head.”

She called their pediatrician, who said to bring him in. “He couldn’t do anything … stand … hold himself up or even crawl,” she said. The doctor sent them to the hospital, where a full body scan was ordered.

“All the tests came out negative,” Ford said. They sent him home with pain relievers, but that night Chase ran a high fever. At breakfast, he choked on his food and his mother had to clear his throat. “I rushed him back to the ER,” she said. More tests followed.

“I don’t know what’s wrong with him,” the doctor told them. Chase was airlifted to Kosair Children’s Hospital, where physicians said he had severe spinal-cord swelling. It would take 72 hours to know how bad the damage was.

It was very bad. “They said he would probably not be able to walk ever again … and would just lay there like this forever,” his parents were told.

“My husband (Tony) passed out,” Ford said. “I laid my head down on Chase’s bed and cried.” How could she tell a 2-year-old that he would never ride a bike or play baseball — “that his life had changed forever,” she wondered.

“All he ever asked is, ‘Can I go home? When can I go home?’ Then one day he stopped asking and he became very withdrawn,” Ford said.

Chase was transferred to Frazier Rehab, which is where Ford heard about Dr. Susan Harkema, the director of the National NeuroRecovery Network and the chief of research at Frazier.

Harkema came to Frazier from the University of California, Los Angeles, where she had developed Locomotor Training. She had also worked with actor Christopher Reeve after he was paralyzed. His foundation backs her work at Frazier.

Harkema thought she might be able to help Chase. She made no promises, Ford said. Each case was different and each patient responded differently.

The training called for Chase to be suspended in a parachute-like harness above a treadmill while a team of therapists and technicians moved his hips and legs for him. “It’s called pattern retraining,” Ford said. The training tried to tell his body “this is what it used to be able to do … to show it that it can learn again … that connections can be made,” she said.

His body learned. “The training is still going on,” his mother said. “But he went from being paralyzed from the neck down to crawling and then to walking with a walker.” ‘Look, Mommy! I’m walking. I’m walking!’ ” Chase called to her.

Three weeks ago, Chase, who is now 3, walked onto a stage at a “Magical Evening” fundraising event in New York for the Christopher Reeve Foundation. He is now able to use two “trekking poles,” similar to the sticks mountain climbers use, to walk, 18 months after he couldn’t move anything at all. He has even started trying to jump a little, his mother said last week.

The foundation calls him “their poster child,” she said. “I don’t know; I just call him my child.”

Renee Ford thanks God, Harkema’s team and Frazier Rehab, where she now works as a coordinator for the center, for Chase’s progress. (The family moved to Louisville from Owensboro to be closer to Frazier Rehab.) “This is cutting-edge therapy,” she said. Chase is “showing you can come back from a spinal-cord injury. I’ve been astonished at what he’s gotten back.”

The center also gave Renee and Tony Ford, who have two other children, part of their lives back.

“The key is to be positive,” she said. “Don’t act defeated. You’re going to go forward … and sometimes prove what you’ve been told to be wrong. If I had just laid down and let it consume me, then what am I showing Chase?” she asked.