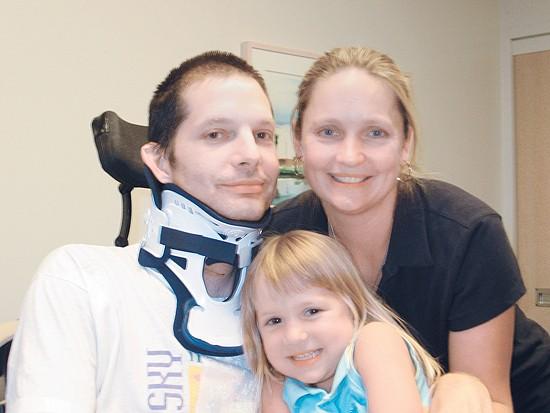 GLASGOW – On July 1, Glasgow High School science teacher Todd Glaser and his family were at Fort Peck Lake for a picnic. Glaser was playing Frisbee with his 6-year-old son, Brett.

As he raced to beat his son to a catch, Glaser turned his head sharply.

“It was just like somebody shot me,” he said. “I fell kind of awkwardly, hit my knees, hit my head.”

Glaser was only in about 6 inches of water. But he could no longer move.

“I remember falling,” he said. “I remember trying to scream for my wife and I couldn’t. I didn’t have any Motor function.

“Then I thought I was going to drown.”

Glaser was resuscitated by his wife, Wendy, a nurse, and was brought to Billings for surgery.

Since then, the Glaser family – Todd, Wendy, Brett and 4-year-old Rachelle – has been staying with Wendy’s sister in California, where Glaser does Rehabilitation and Physical Therapy at the University of California-Davis.

Doctors are still mystified by the accident.

“I hit a deer about three weeks before that … in my van,” Glaser said. “Their only explanation is that I might have cracked one of my Vertebrae, then when I turned my head real quick, the pressure made it break the two vertebrae below.”

Glaser says he recently saw some X-rays of his spinal cord, and two pieces of vertebrae C5 and C6 are completely gone.

“They broke up so much they couldn’t replace it,” he said. “It’s a polymer that they stuck in there.”

For a moment, he lets bitterness get to him. “That’s a lovely part of a wonderful day of my life.”

But he doesn’t let his injury get him down for long.

“With some faith and hard work, I’m going to be back on my feet again. When? I don’t know, but I’m going to get there.”

Glaser is a currently an outpatient at the UC-Davis Medical Center. He works with an Occupational Therapist twice a week and three times a week with a Physical Therapist.

“The doctors only gave me two, but I wheedled a third day out of him,” Glaser said. “It pays to snivel and whine a little bit. I figure, the more the merrier for me.”

Glaser also works on his therapy at home with Wendy.

“My wife is my physical therapist here,” he said. “She has to be.”

Glaser isn’t giving up, pushing himself in rehab to work on standing with some support from his therapists. He even pushes himself to work on the parallel bars, although he admits “they’re usually hanging onto me and bracing my legs so I don’t collapse.”

Movement on his left side is better than his right.

“My left leg is doing better than my right,” he said. “My right side must have taken a bigger hit when the injury occurred, because it’s been lagging behind.”

“My right hand – there’s not much on that side,” Glaser said. “Everything’s better than what is was. It’s hard to sit around and wait for all this to come.”

He wants to be walking when he returns to Glasgow.

“The community in Glasgow, it’s incredible,” Glaser said. “They had a big fundraiser, a big auction … raised a bunch of money. Kids in school there are smashing cars with sledgehammers, raising money, selling T-shirts. … It’s very heartwarming. And they just keep doing it.

“The community people – it’s just been unreal. You never would believe it.”

One fundraiser, a dinner and auction held by family friends Stacey Fast and Tami Burke, raised $50,000 in one night.

“He’s just a good guy and really involved in the community,” said Marj Markle, the principal at Glasgow High. “His wife is a really excellent person; she’s a nurse at the hospital. Both are really giving, so people are giving back.”

A brief list of fundraising events, tallied by Markle, includes a gun raffle, a car raffle, jeans days and more. Many people are donating to an account sent up for the family, says Markle.

“His friends have pitched in and helped pay for his house payments, and we try to send them money each month down there,” she said. “The kids have really jumped in. One boy did a car bash for them. One girl said, can I donate a pig?”

Along with making house payments, Glaser’s friends are taking care of upkeep on his home. Plans include any remodeling needed before Glaser’s return.

“We’ll redo his house if we have to when he comes back, but we’re hoping we won’t have to do that,” Markle said. “He’s really taken it in stride, and he’s exceeded the expectations. I think it’s pretty neat, and hopefully he’ll continue to make improvements.”

To stay in touch with friends in Montana, Wendy Glaser set up a Web site on www.caringbridge.org. To track Glaser’s progress, just enter toddglaser as the site name.

“People can go in and read it and write little notes if they want to,” Glaser said. “It’s been pretty neat to read some of that. I either laugh or cry, one of the two.”

Despite his injury and the long road ahead, Glaser remains positive.

“I told (Billings surgeon) Dr. Goodman I’m coming back there and I’m going to come back walking,” he said. “When that day comes – I don’t know when it will be – but it will come.”

By CATHY ULRICH
Of The Gazette Staff
Copyright © The Billings Gazette, a division of Lee Enterprises.

Wheelchair user Tony Stephenson explains about his life in the aftermath...