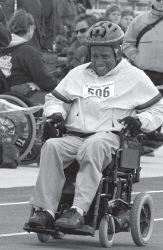 At age 21, Taft suffered a spinal cord injury and could no longer walk. He’d been serving in the military during the Korean War and was a crewmember of a plane that lost an engine and crashed. The United States Department of Veterans Affairs brought Taft “back to life,” the veteran said, and he’s remained positive when he might otherwise have been devastated.

“I quickly realized that I wasn’t going to be able to do the things I used to be able to do like dance or run track-all the things a normal person can do,” Taft said. “But the (VA), especially one like the one in Long Beach, brings you together with other guys and you say to yourself, ‘Hey, these guys are doing pretty good.’ You start to change your mind about ‘This is the end of me.’ They get you to stop crying.”

Some veterans who lost the ability to walk still try to walk. Taft said he hasn’t tried. He likes to move fast, and he said he knows he’ll never be able to walk quickly again. So he sticks to moving around in the wheelchair-and he moves fast, he said. At the recent wheelchair games, Taft took his need to move fast to a new level.

This was the first time Taft participated in the Wheelchair Games. He said he really enjoyed it and will make a tradition of it.

“It was more entertaining than I thought it would be,” Taft said. “They have all sorts of things that you’d never imagine a person in a wheelchair doing. Things like weightlifting and swimming. . . . It was a lot of fun. To see all these different people there to compete-people who are blind- was amazing. They’ve got something for everybody and it really makes you feel good.”

According to the VA, the National Veterans Wheelchair Games are a showcase for the benefit of sports rehabilitative programs and for the athletic abilities and personal achievements of the nation’s disabled veterans.

With more than 550 athletes from 46 states, Puerto Rico and Great Britain, the National Veterans Wheelchair Games is the largest annual wheelchair sports event in the world, according to event officials. All athletes are military veterans who use wheelchairs due to spinal cord injuries, certain neurological conditions, amputations or other disabilities.

“It was quite an accomplishment for these guys-having served in the military and getting spinal cord injuries-to compete,” said Taft’s wife, Barbara. She said she’s very proud of her husband and very happy for his victories.

Taft exercises twice a week to stay in shape as part of a VA program. “I can’t wait to go work out each time,” he said. He also enjoys the camaraderie among the guys at the gym, which helps keep him in good spirits, he said.

Taft was a private pilot for more than 30 years and a member of the International Wheelchair Aviators in Southern California. One of his longest flights as a pilot was from Southern California to Chicago. The Federal Aviation Administration wouldn’t relicense Taft in 1998 due to a pinched nerve he suffered, which made Taft’s left arm too weak to fly a plane.

Taft said he’d always treasure the time he was able to fly. When asked why he loved flying, Taft said only someone who hasn’t flown asks that question. And in response to the question of whether it took a certain amount of courage to fly again after his 1952 accident, Taft said he never had fears to get back into a plane. “I had nothing to do with that crash.” He’s quick to say that he’s never been in an accident as a pilot.

Taft is currently receiving care at the VA medical facility in North Hills.