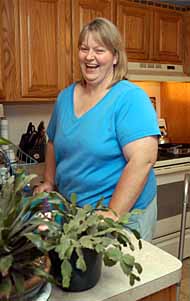 RANDOLPH – As a child, Diane Niles loved doing cartwheels. She found them easy – up and over. So when her 12-year-old daughter, Ashley, was practicing the gymnastics maneuver for cheerleading, Niles said, ‘‘Here, I’ll show you how.’’

On the front lawn of their Randolph home, Niles did a handstand, swung her legs over her head and collapsed on her face, landing hard on her stomach.

‘‘I’ve done hundreds of them, but something happened that day with my wrists – they gave out,’’ she recalled.

A burning sensation flashed the length of her body, from her neck to her toes. Everything felt numb; she couldn’t move her arms or legs. In an instant, the 40-year-old mother of two had been paralyzed from the chest down – an ‘‘incomplete’’ quadriplegic because she still had sensation and could move one toe and one of her arms ever so slightly.

Her husband, Michael Niles Sr., remembers doctors saying, ‘‘spinal cord injury’’ for the first time. ‘‘You hear those words and you fear the worst, but you still hope for the best,’’ he said. Doctors could not say if his wife would ever walk again.

Diane Niles remembered thinking, while lying in her hospital bed: ‘‘It is is unacceptable not to walk.’’ She looked at her husband and said, ‘‘We’ll get through this. I’ll walk again.’’

Nearly two years later, she is. Usually it’s with the help of a cane or walker, but occasionally she takes a few steps by herself. She can brush her hair, cut her food and feed herself – all things she could not do a year ago. And she recently started driving, without any adaptations to her car. She can take Ashley, 14, and her son, Michael Jr., 11, to softball, football, other school events and shopping. ‘‘I still have the same goals with my kids as before,’’ she said.

Whatever she does, she is quick to smile. ‘‘Oh, I have my days, when I get frustrated, but I’m not a quitter,’’ she said. ‘‘I have to keep working to get better.’’

‘‘Diane is amazing – to be that positive after that traumatic an event, ’’ Heckathorn said. ‘‘She never turned down the chance to do more therapy, no matter how tired she was.’’

Every spinal cord injury is different, each comeback an individual success. ‘‘No two people recover at the same rate,’’ Heckathorn said. ‘‘That is why nobody gives you a definite prognosis. With incomplete Quadriplegia (both arms and legs affected), you usually get much more recovery than with complete quadriplegia (the kind Christopher Reeves had) where there is no sensation or movement at all.’’

A major factor in recovery is a patient’s condition before an injury, and Diane had always been active and healthy.

When she fell, Diane ruptured a Cervical disc between the C4-C5 Vertebrae near the top of the spine. In a cervical discectomy, surgeons removed part of the broken disc to relieve pressure in her spinal column, but there was still inflammation that took months to subside.

In months of therapy, Diane worked to strengthen the supporting muscles and ease the load on her spine. Her neurological function gradually returned. One day she could feel her husband’s skin; on another day, she could lift an arm higher than before or wiggle some fingers.

The biggest moment was when she was able to stand alone, without the sudden drop in blood pressure that is part of severe spinal cord injuries and can cause fainting.

‘‘I told myself that if I can stand on these legs and hold this body up, then I can walk,’’ she said.

She also credits unfailing support from her family and friends. Her husband was there every day, urging her on, washing her hair, cutting her food. Michael Niles recalled, ‘‘We just said, ‘The main thing is to keep the focus on the future – we can’t worry about things you can’t do.’ We’re a team. We always worked together to get what we need. And now, I need to be more of an Extension of her. It may sound strange, but it has made me a better person. I don’t take things for granted.’’

At Diane Niles’ office in Boston, nothing has been moved on the desk she left on a Friday afternoon two years ago, expecting to be back again on Monday morning. The coffee mug is clean. The photos of her kids are the same, although outdated. The notes she wrote as reminders and stuck on her computer await. Diane still hopes to return to work as a medical insurance billing clerk at Walker Associates.

Steve Colahan, the company’s president, is keeping her job open. When Colahan was 15, a friend of his was paralyzed in an accident. Today that friend is a teacher, in a wheelchair.

‘‘We were taken back when Diane had her injury, but I thought of my friend,’’ Colahan said. ‘‘And Diane was so determined. She was great. We were very impressed by her courage.’’

By SUE SCHEIBLE
The Patriot Ledger