Homes for Our Troops to build house for paralyzed Marine 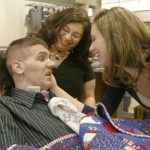 Marine Joshua Hoffman was paralyzed by a sniper’s bullet in Iraq in January 2007. At left is his mother, Reed City resident Hazel Hoffman, and fiancee, Heather Lovell pictured during a day out from a Virginia veterans hospital in 2007.

MIDDLEVILLE — Heather Lovell knows how her fiance, injured veteran Josh Hoffman, feels about moving to a home that’s to be built especially to meet his needs.

“He’s so excited. He doesn’t even have to say anything. You can see it in his face,” Lovell said.

A groundbreaking ceremony was scheduled for today at Foxmoor Court on a specially-adapted home the couple could move into by the end of the year.

Homes for Our Troops, a Massachusetts-based non-profit organization, selected Hoffman, 26, to receive the home a year ago. The organization has completed 30 homes and has 26 under construction statewide.

Hoffman, a former Marine who is paralyzed from the chest down, lets Lovell know how he feels by mouthing words and saying a few words through a device. He spells out words one letter at a time. He smiles as she hugs and kisses him.

Hoffman joined the Marine Reserves in 2002 as a way to pay for college.

While serving in Iraq in 2007, he was hit in the neck by a sniper’s bullet, which severed his spinal cord. The former Wayland resident returned to West Michigan on March 25 after spending more than a year in a Virginia Veterans Administration hospital.

Since then, around-the-clock nursing care has been challenging for Hoffman and Lovell in their two-bedroom Kentwood apartment. Both bedrooms are crammed with medical equipment and supplies.

“There’s not an apartment big enough to store all of his equipment,” said Lovell, 21.

But their new 1,800 square-foot, three-bedroom home will give them the space they need, said Tom Benoit, chief financial officer for Homes for our Troops.

Volunteers including contractor AIM Home Services, LLC, of Caledonia Township, will build the house. It be mortgage-free, Benoit said.

“What it’s designed to do for him and his family is to help him regain as much independence as possible that he lost as a result of his injury,” said Homes for the Troops spokeswoman Vicki Thomas.

Though the couple has received financial help from the military, having a paid-for home is an amazing gift, said Lovell, a full-time student at the University of Phoenix.

“Obviously, we are paying rent right now. It will be a relief when we don’t have to,” she said.

Construction will start with a three-day Build Brigade in the next few weeks and will continue with help from volunteers and donations. For a list of donations and materials still needed, visit www.homesforourtroops.org.

There have been several setbacks, Lovell said. Hoffman has had pneumonia four times since returning home. But he has started to regain movement in his left arm and some of his speech.