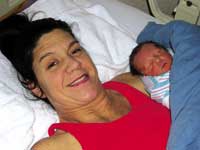 As with many women, Michelle Carston of Westfield always knew she wanted to be a mom. After a 1993 diving accident, when doctors told her that she would never walk again, she took solace in knowing the injury would not prevent her from fulfilling her maternal instincts.

“I couldn’t wait to become a new mom,” she said. “This is the first and the last, I believe.”

Low blood pressure kept Michelle, a 35-year-old quadriplegic, flat in bed for the entire pregnancy. Every time she sat up, she passed out. She delivered naturally at 37 weeks and allowed the Discovery Health Channel to film her delivery.

“I initiated that and thought it was a great way to educate people,” Michelle said. “It was a textbook-perfect delivery. I pushed three pushes, and he was out within 10 minutes after the contractions.”

When nurses placed Pierce on her chest, she looked down at him and his full head of brown hair and “saw perfection.”

Michelle Carston of Westfield enjoys a quiet moment with her new son, Pierce.

Michelle and her husband, Peter, met through an online dating service and married in March 2004. They discussed parenthood before tying the knot. Once wed and ready to start a family, they began tracking Michelle’s fertility cycles, and three months later, learned Pierce was on the way. Both sets of grandparents have been helping out.

A former writer, Michelle helped people as a health-club fitness instructor in 1995, something she considers the most fun she ever had. She will soon begin working to raise awareness for the IKAN Sports Foundation of Brandon. The foundation promotes physical activity through the use of assistive technologies.

Michelle maintains a positive can-do attitude, loves life, and does not let other people’s doubts dissuade her from living every day to the fullest. She plans to instill in her son that same realistic optimism.

“Anything is possible,” Michelle said. “Where there’s a ‘wheel,’ there’s a way. That is my motto. Your attitude is governed by you, and it’s a daily, minute-by-minute choice.”

Discovery Health Channel have been documenting her pregnancy and birth. A clip from a full-hour show about her experience will air tonight (3/14/2006) and the full show will air sometime in June. Check it out tonight at 9PM Eastern time.

Many spinal cord injuries from crashes