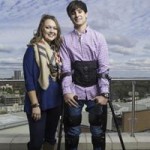 State-of-the-Art Device Allows Individuals with Spinal Cord Injury to Stand and Walk; Regulatory Clearances in USA and Europe Pave the Way for Commercialization

CLEVELAND, March 10, 2016 (GLOBE NEWSWIRE) — Parker Hannifin Corporation (NYSE: PH), the global leader in motion and control technologies, today announced that the U.S. Food and Drug Administration (FDA) has given clearance to market and sell the Indego® exoskeleton for clinical and personal use in the United States. The company intends to commercially launch the device in the United States in the coming months. Indego is already commercially available in Europe, having received the CE Mark in November 2015.

“For individuals who sustain spinal cord injuries, this is a milestone that could have a meaningful impact on their lives,” said Tom Williams, chairman and CEO of Parker Hannifin. “In a relatively short amount of time, we have taken what was a prototype device and readied it for full commercial launch. We are excited about the future for this new growth opportunity.”

The FDA’s clearance came after the completion of the largest exoskeleton clinical trial conducted to date in the United States.

“In sponsoring such a comprehensive and landmark study, Parker demonstrated the safety and performance of the Indego technology,” said Gary Ulicny, Ph.D., president and CEO of Shepherd Center, Parker’s lead clinical partner. “Over the course of more than 1,200 individual sessions, study participants were able to use Indego to safely walk on a variety of indoor and outdoor surfaces and settings with no serious adverse events.”

“This is an exciting development that will allow Indego to be more widely available,” added Achilleas Dorotheou, head of the human motion and control business unit for Parker. “With the regulatory barriers addressed, we look forward to a full commercial launch of the device and further studies that will provide evidence of the economic and health benefits of exoskeleton technology.”

In October 2015, Parker announced that it would supply Indego devices for a four-year U.S. Department of Defense-funded study of the tangible economic and rehabilitation benefits of exoskeletons at three of the nation’s top rehabilitation centers, including the James Haley Veteran’s Hospital in Tampa, the first VA center in the country to use Indego.

Indego is a robotic exoskeleton or powered orthotic device that allows users to stand and walk and holds great promise for affording people with paraplegia a new level of independence.

With annual sales of approximately $13 billion in fiscal year 2015, Parker Hannifin is the world’s leading diversified manufacturer of motion and control technologies and systems, providing precision-engineered solutions for a wide variety of mobile, industrial and aerospace markets. The company employs approximately 55,000 people in 50 countries around the world. Parker has increased its annual dividends paid to shareholders for 59 consecutive fiscal years, among the top five longest-running dividend-increase records in the S&P 500 index. For more information, visit the company’s website at www.parker.com, or its investor information website at www.phstock.com.

Stem-cell research is exciting, but not to investors