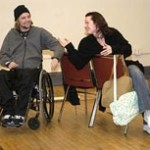 When handsome, California-blond Tobias Forrest steers his wheelchair onto the stage of City’s Theatre’s Lester Hamburg Studio for this week’s opening of “Pyretown,” his presence in the two-character drama will resonate well beyond that intimate performance space. In staging “Pyretown” and casting Mr. Forrest in a leading role, City Theatre has broken new ground for itself and local theater-goers.

Portrayals of disability on stage are few and far between. Film and television audiences are much more accustomed to viewing disability, albeit usually as played by non-disabled people. Actors in these roles are often rewarded with Oscars and other kudos, unaware that such casting is regarded by some people as a contemporary form of black-face.

City Theatre’s decision to not only present a play that explores the human condition of disability but to cast a disabled actor in the main role reflects how times are changing.

“Pyretown” is not in the “triumph over tragedy” genre that people have come to expect from mainstream entertainment. As the title hints, something is burning in “Pyretown,” which is not a place but the highly charged emotional milieu of Harry, a 23-year-old who was paralyzed in an accident as a teen. Harry’s affection and passion for Louise, an appealing but overburdened single mother (played by Chandler Vinton), does not materialize into the lasting relationship he desires.

Initially, City Theatre had planned to hire a non-disabled actor to play Harry but changed course when the disability-savvy FISA Foundation of Pittsburgh stepped forward to cover the cost of auditioning in New York and Los Angeles, in addition to the other expenses that come with hiring an out-of-town actor.

Finding 30-year-old Tobias “Toby” Forrest was pure serendipity. A trained actor with a short but growing resume, Mr. Forrest was actively seeking acting jobs but didn’t know about the City Theatre search. He was working as an usher at Los Angeles’ Kirk Douglas Theatre when “Pyretown” director Diane Rodrigues arrived to see a show. Her husband spotted the striking young wheelchair-using usher. “What about him?” he asked her. “I’ll bet he’s an actor.”

He was, indeed. In winning the role of Harry, Mr. Forrest became acquainted with the creative power of “Pyretown” author John Belluso, an award-winning playwright with a rare bone disorder that had necessitated the use of a wheelchair since age 13. Since his days as a student at New York University’s graduate playwriting program, Mr. Belluso had been mining the experience of disability in his plays. Mr. Forrest was looking forward to meeting the playwright in Pittsburgh as rehearsals progressed.

It was a profound loss for Ms. Rodrigues, who had worked closely with him for several years at the Mark Taper Forum in Los Angeles, where she is associate producer and director of new play development. Mr. Belluso had been the director of the Other Voices Project there until last year.

Mr. Belluso was a rising star, said Ms. Rodrigues, “the most prolific writer self-identified as disabled.” Other playwrights explore Disability issues, but Mr. Belluso’s work is perhaps most widely known and produced. Recently, his writing gifts brought jobs with HBO’s “Deadwood” and two other television programs.

Directing one of Mr. Belluso’s plays and discovering a new actor for it is poignant for Ms. Rodrigues.

“With Toby doing this work, he will carry on a certain legacy in his own career that John will never see. It’s like John offered this up for Toby to take and flourish in it.”

Wheelchair aside, Mr. Forrest is not unlike many a young actor in Los Angeles. He does improv, stand-up (or more correctly, “sit-down,” he chuckles), and some TV. Non-acting jobs mostly pay the bills. He’s developing a pitch for a reality TV show, and has been cast in a movie that is currently seeking funding.

The role in “Pyretown”, especially the chance to work closely with theatre veterans Ms. Rodrigues and Ms. Vinton, is “a huge stepping stone,” he said.

Mr. Forrest broke his neck in a diving accident in the Grand Canyon eight years ago. He had just graduated from Northern Arizona University, where he majored in jewelry and fronted a band as a singer/songwriter. His spinal cord injury affected those pursuits, reducing the lung power needed for singing and the fine Motor skills involved in jewelry-making.

Instead, he pursued a master’s degree in psychology and inadvertently discovered his talent for acting during a role-playing assignment. After obtaining his degree, he re-directed his path, enrolled in acting school and moved to Los Angeles.

In casting the relatively inexperienced Mr. Forrest in “Pyretown,” Ms. Rodrigues trusted her instinct that he was right for the role. When she mentioned concerns about his lack of stage experience, Mr. Forrest cheerily rejoined,” But I have a lot of wheelchair experience.”

It was a response that Mr. Belluso, whose plays are peppered with dark humor, would have loved.

The folks at City Theatre said that staging “Pyretown” has been an enriching experience, bringing about new understandings about disability within the organization. The play exemplifies City’s Theatre’s goal of inviting audiences to experience new worlds. It also highlights the theatre’s two-year-old initiative to increase access for patrons with disabilities — a program that is about genuine inclusion, not simply removing physical barriers.

The FISA Foundation has funded several components of the initiative, such as the addition of audio description for visually impaired patrons. Recently, the Massaro Corporation funded the paving of the gravel courtyard that leads to the Hamburg Studio Theatre. Several seats in the theatre have been removed for the upcoming production to make room for wheelchairs.
(Tina Calabro of Highland Park is a freelance writer who focuses on disability issues.

Lecture: “Beyond Victims and Villains,” actress and activist Victoria Ann Lewis will speak on portrayals of Disability on stage and screen, Sun. March 19 following the 2 p.m. performance. Free.