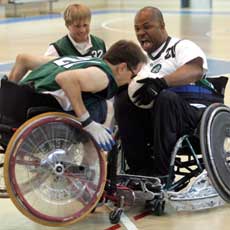 Damon Rozier thought his life was over eight years ago after he was sideswiped by a car while riding his motorcycle. The collision propelled Rozier’s bike into the air. When it came down, it landed on top of him, snapping his neck in two places.

Doctors told him he would never walk again. As he lay in St. Vincent’s Hospital, his body twisted and broken, Rozier thought only of suicide.

But he did. Five months after his accident, members of a quadriplegic rugby group came to visit Rozier at the hospital to show him and others about their sport. Rozier, who once played football and other sports, marveled at the way they crashed their wheelchairs into one another. Rozier said: “I can do this.”

Today, Rozier, now 37 and a single dad with two boys aged 8 and 9, is part of a New York quadriplegic rugby team of 12 that plays weekly and is becoming more popular since the release of “Murderball,” an 85-minute documentary about the sport.

Released July 8, “Murderball” follows two teams of quadriplegics who play full-contact wheelchair rugby in heavily fortified wheelchairs as they battle each other for a coveted spot at the 2004 Paralympics in Athens.

The game is played aggressively. In fact, Rozier is known among teammates as the “hit man,” because he slams into his opponents with such force that he turns them over. “We have been getting many more phone calls since the release of the film,” said Victor Calise, coach of the United Spinal Jets, Rozier’s team. “It has inspired many quadriplegics.”

Developed by three Canadians in Winnipeg, Manitoba, in 1980, Quad rugby has been described as a hybrid of soccer and demolition derby with player-combatants slamming into each other at breakneck speed, fueled by an almost obsessive desire to win. The game debuted as an international sport at the 1996 Paralympics in Atlanta. It’s now acknowledged as the most popular sport at the Paralympic Games.

Their lives on and off court

“Murderball,” shot in New York, New Jersey and Texas, depicts Team USA, which has reigned supreme in the sport of quad rugby for years, squaring off against a determined and motivated Team Canada. The U.S. team is coached by Joe Soares, a former gold medalist from the American squad.

The movie examines the lives of players off the court as well, chronicling relationships with friends, family and lovers, and detailing how even tasks such as driving and making dinner can prove challenging and frustrating.

Rozier knows this well. He drives a car specially equipped with hand controls, and his apartment in Brooklyn has been renovated to accommodate his wheelchair.

“I thought the movie was breathtaking,” Rozier says, after seeing a recent screening at Lincoln Center. “We just want society to treat us like anyone else and not like aliens. I personally would like to change people’s ignorance and misconceptions about being in a chair.”

A comedian, Rozier, whose wheelchair is hoisted onto the stage by three men, has appeared at the Laugh Factory, the Improv and Stand-Up New York. He works his Disability into his act. “You think raising kids is hard?” Rozier asks. “Try raising kids from a wheelchair. That’s a tough act to follow.” Rozier says his audience always thanks him after a performance. “People see me up there telling jokes, and they realize that they have very little in their own lives to complain about,” he says. “They appreciate that.”

The United Spinal Jets are reorganizing, and they need more players to join the team. The NFL’s Jets and the United Spinal Association, a national nonprofit organization dedicated to helping people with spinal cord injury, support various types of wheelchair sports. including the United Spinal Jets, one of 40 teams in the U.S. Quad Rugby Association. “We want people in chairs to stop locking themselves away in their houses and get out and enjoy life,” Rozier says.

At age 29, Mark Zupan has already experienced polar extremes that few people could comprehend, much less cope with. Back in 1993, a car accident left Zupan paralyzed and dependent on a wheelchair for mobility. Fast-forward 12 years, and Zupan now finds himself thriving and signing autographs for “Murderball” fans.

Zupan, a civil engineer who lives in Austin, Texas, is one of the more unlikely stars of “Murderball.” “I liked everything about the movie,” Zupan said after the New York City screening. “Quad rugby was portrayed so nicely … our lives were portrayed with honesty and integrity.”

Henry Alex Rubin, a native of New York City and graduate of Columbia University, directed the film, along with former Spin Magazine editor Dana Adam Shapiro. Both said one of their goals in making “Murderball” was to change the public’s perception of people with disabilities.

“We really wanted to make the audience forget that the players were in wheelchairs,” Rubin said. “Dana and I are not big sports guys, so we focused more on capturing raw, unscripted emotions.”

Zupan, whose well-muscled torso and warrior-like attitude belie his warm personality, has been the focal point of a barrage of recent publicity and interviews, including HBO Real Sports, ESPN and stories in Details, Maxim, Premiere, and a recent fashion shoot for The New York Times. Zupan is also appearing on billboards in New York and Los Angeles for Reebok as part of the company’s “I am what I am” campaign.

Gary Springer, owner of Manhattan-based Springer Associates PR, has been directing “Murderball’s” publicity campaign as if he had a personal stake in its success — and, in fact, he does. In 1999, when Springer’s son Nick was 14 years old, he came down with a case of meningococcal meningitis while at sleep-away camp in the Berkshires.

The disease caused Nick to lose the use of his legs below the knee; he also lost movement in his elbows and wrists. “I was given my last rites, and my dad didn’t think I would make it through the night,” Nick Springer said. “But the most difficult part of my Disability was not being able to leave the hospital for nine months.”

According to the Jackson-Heights-based United Spinal Association, more than 700,000 Americans have disabilities of the spinal cord. Springer’s father credits the association with helping to get his son into Quad rugby back when he was still in rehab in White Plains. He also says the association has been helping Nick ever since. “I just made a spot on Team USA’s development team, and I now could be on the road to the 2008 Paralympic Games in Beijing,” Nick Springer says. He currently plays quad rugby with the Hoveround Lightning in Sarasota, Fla.

Scott Hogsett, 32, said he was the first quad rugby player approached to be in the movie. “We want to get the word out about our sport,” says Hogsett, who lives in Phoenix. Hogsett, who became disabled in 1992 after an accident at a party, says he has no time for bitterness. “People in chairs are no different than anyone else, and we want people to realize that,” says Hogsett, who was recently married.

He says he is still ruled by a strong work ethic. “Hard work can translate into anything at all,” he says. Like other Team USA members, he hopes hard work will translate into a gold medal at the 2008 Paralympics in Beijing.

While Rozier doesn’t have his sights set on the Paralympics in China, he hopes to accomplish things in New York with a soon-to-be-released DVD about what it’s like to be in a wheelchair and raise children.

“I want people to realize that life doesn’t stop because you’re in a chair. My other message to people is to be happy with your life, and don’t take things for granted,” Rozier adds. “For someone in a wheelchair, tying your shoe can be a major job.”

Alan Krawitz is a freelance writer.
BY ALAN KRAWITZ

Facebook
Twitter
Email
Mix
Digg
Previous articleStatement of Solidarity on 15Th Anniversary of Americans With Disabilities
Next articleMurderball: This documentary is the wheel deal

Hurricane Relief for People with Disabilities