If you want to be inspired, check out the Warrior Games 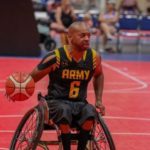 Spc. Brent Garlic’s dream of joining the NBA came to an end after he was injured during a deployment when a fuel tank following his vehicle through a mountainous terrain lost control of its breaks on a steep hill and hit the rear of his truck.

Before his accident, Garlic was living out two dreams: serving in the Army and playing ball – the things he loved the most.

“I was on track to going to play (basketball) professionally before the accident,” Garlic, 40, said. “That’s why I was so mad when the accident happened, I lost two dreams at once,” he said.

Then Garlic found out about the Department of Defense’s annual Warrior Games and is now representing Team Army for the second year in a row. The games, sponsored this year by U.S. Special Operations Command in Tampa, Florida, kicked off June 21 and end June 30.

The Warrior Games were established in 2010 as a way to enhance the recovery and rehabilitation of wounded, ill and injured service members and expose them to adaptive sports. The Games encourage them to stay physically active when they return to their local communities, and inspire and promote opportunities for growth and achievement. Families are a significant part of an athlete’s recovery and this year promises to have the most robust family program to date.

“I didn’t know that outside of the Olympics, you could do something like this,” Garlic said. “I didn’t realize how big it actually was, I just couldn’t not be a part of it,” he said.

Garlic’s journey to where he is today wasn’t an easy ride, he had a long road to recovery after having his jaw wired shut for three months after his face repeatedly hit the steering wheel of the truck he was in during the accident, leaving him to eat only through a tube up his nose. He ultimately lost 80 pounds as a result.

In addition to facial fractures and a broken jaw, Garlic suffered a concussion, a broken right collar bone and shoulder, multiple broken ribs, and both of his lungs collapsed. He also had a double compound fracture of his spine and hip and suffered severe burns from the truck’s hot oil that took three months to heal.

Now almost done with this year’s games, Garlic attributes both physical and mental growth to competing. As someone who likes to stay busy, Garlic gets to keep himself occupied training for the games and also interacting with other service members who have their own stories of struggle.

”People don’t grasp how deep the mental health issues go,” he said. “But you come here and you get to listen to stories about how others adapt to their new injuries, you share experiences and stories and know that people here are going through some of the same things you are.”

“It puts me in better shape, physically and emotionally,” he said.

During the 2018 Warrior Games Garlic was awarded the 2018 Heart of Team Award within the Army branch. “I just went out there and I did everything i could, it’s an honor I cherish,” Garlic said.

But for Garlic, his best could be better. For this years games, he trained even harder, “my goal was to be better for every single event, and so far, I think I’ve met that goal, or I hope so,” Garlic said.

While Garlic’s accident may have taken away his hoop dreams,, the Warrior Games have helped fulfill new dreams.

The Warrior Games have helped him find a team again and a renew his love for sports.

“Being here is the closest I have to being in active duty,” Garlic said.

After 10 day of inspirational competition, the athletes will come together again Sunday June 30 for the closing ceremony, hosted again by Jon Stewart, former The Daily Show host and long-time supporter of the Warrior Games. Individual and team performances will also be celebrated along with the distribution of the Heart of Team Awards and a performance by multi-platinum entertainer Sara Evans.