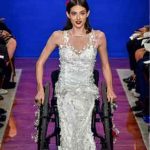 “To now be a part of this representation is really beautiful and overwhelming because I craved it so much when I was little.”

All eyes were on the stunning wedding dresses at New York Bridal Fashion Week, but there was one special moment that stole the show.

Bri Scalesse, a model who uses a wheelchair, made her way down the runway at the recent THEIA show wearing a white wedding dress. Her wheelchair was decorated with white flowers to complete the look.

THEIA’s creative director, Don O’Neill, was overcome with emotion as he watched Scalesse — wearing his design — go out onto the runway.

Many women inspired this moment in today’s @theiacouture show .. Frida Kahlo was one, but more importantly the beautiful Julie Helen from County Cork, whom I have known since she was a baby , was diagnosed with Cerebral Palsy at 18 months old , a smart super Intelligent woman working at Inclusion Ireland, radiant in a THEIA gown on her wedding day in 2016 had encouraged me to take inclusivity a step further .. we discovered the gorgeous model @briscalesse who embodied the Goddess THEIA today in her first ever runway show.. a pure radiant light , the star of the show .. @jacquidavishair captured this moment as Bri made her first exit , beaming the brightest smile heading out in her first fashion show to Coldplay’s “Fly On” .. .. we had given Bri wings and watched her Fly ……….

Scalesse told TODAY she often felt lonely as a child, who didn’t see herself represented in the media.

“It was … hard to feel seen in a sense and that my body was desirable and beautiful and wanted and what is right and normal,” she said. “To now be a part of this representation is really beautiful and overwhelming because I craved it so much when I was little.”

Scalesse is a graduate student at Columbia University studying nonfiction writing. She explained that she has used a wheelchair since she was 6 years old after suffering a spinal cord injury in a car accident.

“I did not find representations of myself in the media pretty much anywhere. I didn’t see pictures in magazines and actresses with disabilities,” she said. “I felt kind of alone.”

Scalesse, who isn’t represented by an agency, knows how important it is for other people in the community to see themselves represented. She said that is the main reason she wants to keep modeling. Scalesse got her start earlier this year by working with FFORA, an accessory line that puts disability first.

“I met amazing people on set, which led to different jobs and then I met more amazing people,” Scalesse said. “Everything I have done has been one connection leading to another.”

Scalesse is graduating in May and working on a manuscript about “how to feel desired and accepted in a world that isn’t built for disability,” she said.

“It is really wild for me to be in this position,” she said. “I definitely want to keep going.”

Half of spinal cord injury patients may still have some connectivity,...