How wheelchair rugby ‘changed everything’ for one athlete 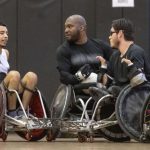 Carl Williams maneuvers across the court with the practiced precision of an athlete. He simultaneously searches the crowd, calculating which team member can catch an inbound throw without being intercepted.

This might seem a tough task for Williams, a double amputee aboard a wheelchair. But Williams, 38, has become a master of wheelchair rugby, a full-contact sport with a mix of rules from football and soccer. He takes aim the moment he spots Timothy Jones, the other top scorer for a team called the TIRR Texans, which was started in 1997.

Williams has lived most of his life with prosthetic legs and deformed arms as a result of contracting meningitis as an 11-month-old. But it wasn’t until he joined the team that he got close to others with similar disabilities, like Jones. Both are leaders on the team, which was ranked sixth in the nation according to the United States Quad Rugby Association.

For Williams, as well as other teammates, coaches and University of Houston students, participation in the decades-old rugby program has proven transformative.

Dr. Michael Cottingham, an associate professor in sport administration, started the Adaptive Athletics at UH student organization to promote athletic programs for students with disabilities. He is a paraplegic himself as a result of a spinal cord injury suffered when he was less than a day old.

After playing wheelchair tennis and coaching the University of Arizona quad rugby team, the largest such collegiate-level program in the nation, Cottingham started the UH program when he arrived in 2012.

In 2015, the college organization added its own wheelchair tennis team, which is coached by students, many of whom also help out with TIRR Texans rugby practices. After practice, students are usually encouraged to hop into the rugby wheelchairs and join the athletes for a game.

UH regularly hosts TIRR Texans competitions, and the team uses the City of Houston’s Metropolitan Multi-Service Center to practice. The coaches are professionals who have competed for other wheelchair rugby teams.

The TIRR Texans include players from the university and Greater Houston. Some travel as long as two hours to attend biweekly practices. While the program is open to everyone, most of the rugby players are men.

That’s no coincidence, said Cottingham, who has a Ph.D. in human performance with a concentration in sport management and researches athletes with disabilities. He said 84 percent of those with spinal injuries are men, who more often participate in high-risk activities such as shallow-water diving, fast driving and military and construction work.

Players generally receive physical and cathartic benefits by interacting with other disabled teammates. And they have opportunities for conversations that might otherwise be difficult.

“If you go to someone who is like a 24-year-old male who is a construction worker and say ‘Do you want to talk about your feelings?,’ they’re going to be hesitant, right? But if you go to the same people and say ‘Hey, OK,’ and through that, there’s a lot of that peer mentorship,” Cottingham said.

Since the program began, Cottingham has seen it foster better relationships between the athletes and able-bodied university students who participate, too. He said it’s particularly important for UH students studying healthcare, psychology and physical therapy to better understand issues faced by members of the disability community.

He said they learn to treat players as peers and friends rather than someone who needs care.

“One stereotype that a lot of people get with the wheelchair players is they think that they are really dependent,” said Patrick Larroza, a tennis coordinator and assistant coach for Adaptive Athletics at UH. “One of the athletes is able to get in and out of his car by himself and he drives a Mustang. He gets two wheelchairs in his car all by himself. They are all really, really independent.” 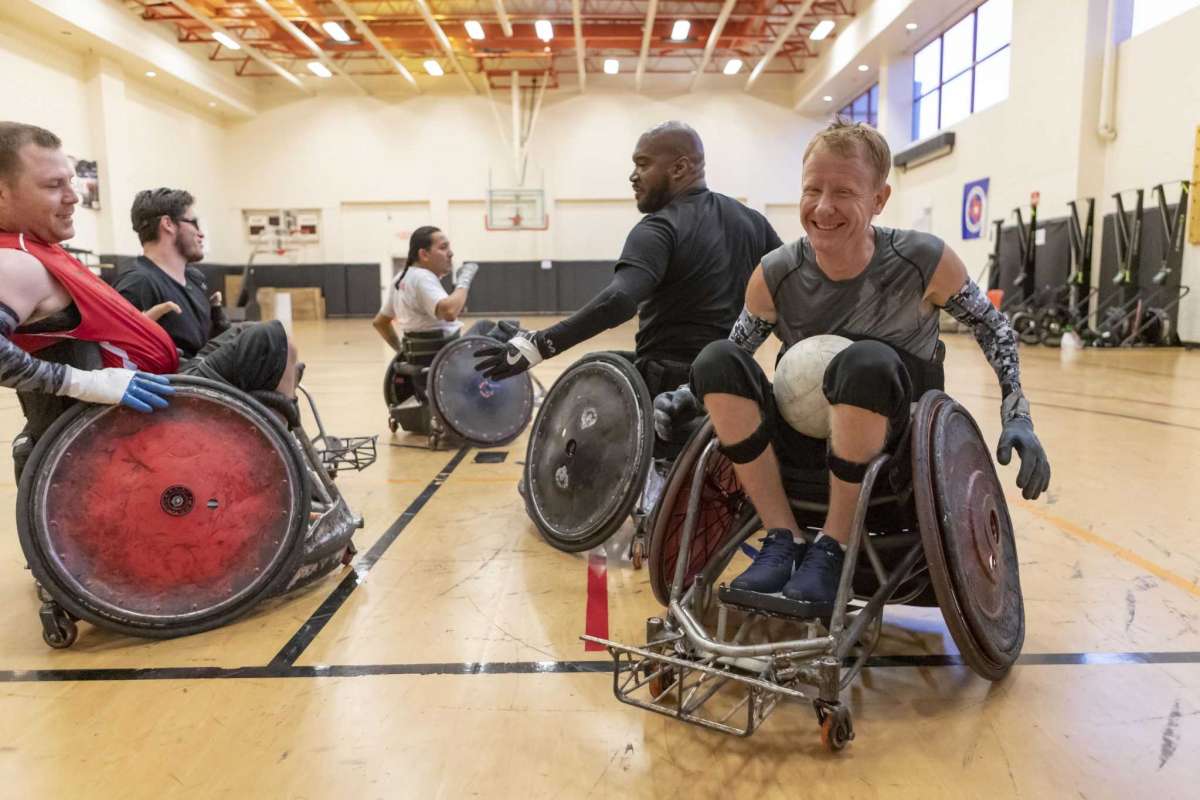 Williams first joined the rugby team in 2016 and for him “it changed everything.”

“Since I’ve never had counseling, I never had someone to talk to,” Williams said. “I’ve never been around people (who are) like me, so when I started playing with those guys, it just helped me.”

From the beginning, he looked up to Jones, 35, as a friend and mentor, learning skills like chair control and positioning. He describes Jones as “extremely patient with the newer guys.”

“I try to learn from him because he’s a great player and a great teacher,” Williams said. “He’s the quarterback of the team in my eyes.”

In 2005, when he was working as an aviation construction mechanic, he twisted his ankle and fell 15 feet onto a concrete floor as he walked across the cockpit while setting up a fighter jet. He shattered his vertebrae, leaving him paralyzed in the legs and torso. The rehabilitation center he attended referred him to the team in 2006 — and he’s been playing ever since.

Jones also went back to school and graduated with an engineering degree from UH in 2013 and has been working as a mechanical design engineer for the last seven years.

Jones has seen a big difference in his own level of physical fitness over the years he’s been playing wheelchair rugby.

“Once you leave the court, you’ll notice the endurance for daily activities like pushing up a big ramp or hill through a parking lot gets a lot easier the longer you’re in an athletic sport,” he said.

He has also learned to rely more on his friends and teammates.

“If we have a question (or) we don’t know how to figure something out, there’s probably somebody around who’s gone through the same thing and might have some advice,” Jones said, “which you’re not gonna get in a recreational therapy or hospital scenario because they like to go by the book and not by what works.”

Williams had been wanting to play sports since high school. But because he had previously not known anyone with a disability, he had felt unable to participate or even try out. That changed in 2015, when his wife spotted the Adaptive Athletics at UH program on Facebook.

That changed his life.

“It’s a brotherhood,” Williams said. “I was missing that. I have never played on a team, so I didn’t know what it would be like. I realized how we become one when we’re on the court. It’s truly a blessing.”