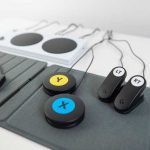 Microsoft’s Xbox Adaptive Controller (XAC) facilitates gaming for players with accessibility needs. While a forward-thinking device, the XAC isn’t without limitations. To get the most out of the peripheral, users must purchase separate triggers, switches, and other accessories. Doing this can get expensive, especially for those living on a limited budget. Logitech has a solution with its upcoming product: the Logitech G Adaptive Gaming Kit. I recently participated in a conference call where I got to see what the Adaptive Gaming Kit is all about.

Well before Microsoft revealed the XAC, the Redmond-based company asked Logitech to provide it with joysticks. Logitech happily did so without fully knowing what Microsoft needed them for. A month prior to its reveal, Logitech saw the XAC and immediately became excited over the product’s potential. The XAC fits with Logitech’s mission statement of bringing gamers together. It’s also an area the company had never focused on. The XAC gave Logitech the base to understand the disabled gamer community.

Logitech took field trips around the world to conduct research for the Adaptive Gaming Kit. The company went to the United Kingdom and met with SpecialEffect; a charity organization that works with folks who have accessibility needs. Not only did Logitech meet with SpecialEffect, but they also spoke with a number of gamers who showed the company their accessibility needs and how they solved their individual problems. Every user’s situation was unique, so the challenge became making a product that served as many people as possible.

Inspiration for the Adaptive Gaming Kit came from SpecialEffect. When making house calls, the organization assembles a large box of parts that it uses to set up gaming solutions for users. Logitech took this basic concept (a bento box of parts) and created a device that incorporates all that it learned from players. The end product is something that Logitech feels solves the problems of 80% of those with accessibility needs. 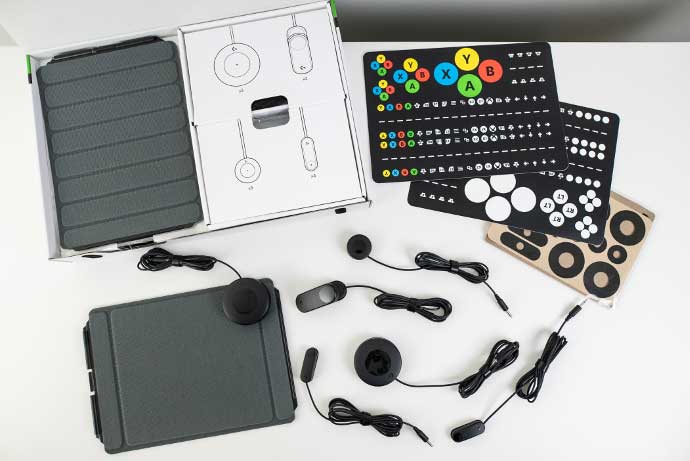 “Out of the box, the XAC is a base station,” says Logitech. “However, to truly unlock its potential, the user needs to connect other input devices like joysticks, buttons, or triggers to its many parts. The $100 Xbox Adaptive Controller is just the start.

“The availability of accessories is limited; for example, the cost of individual buttons can start at $40 each and go up from there. This can quickly become complicated and expensive. We realized that if we wanted gaming to be more inclusive, then a simpler solution with a lower barrier to entry was required.

“Therefore, Logitech G worked with Microsoft and select organizations, like SpecialEffect, AbleGamers, and Mt. Sinai’s Abilities Research Center, to create a new offering — the Logitech G Adaptive Gaming Kit. It is designed to be a simple, flexible, and robust solution to further expand the possibilities of play of the Xbox Adaptive Controller.”

The Adaptive Gaming Kit has a set of controls users can easily configure. This includes a wide range of buttons and triggers with “gaming-grade components for performance and durability.” Below, you’ll find everything that comes in the box:

Both the large and small buttons have mechanical keyboard switches inside. In fact, these are the same switches you’ll find in Logitech’s G915 gaming keyboard. Like those keys, the Adaptive Gaming Kit’s buttons are very durable, stable, and low-profile. The latter is important since a lower profile has a lower actuation point; meaning the buttons are easier to press. There are also stickers and labels that match the symbols found on an Xbox controller. This helps users know what functions and commands each button or accessory has assigned to it.

Considering how the XAC has 19 different slots for each individual controller function, wire management can become an issue. The Adaptive Gaming Kit solves this by including flags one can wrap around the cables. This is also an ideal solution for when it’s time to disconnect and reconnect the buttons. Numerous blank stickers let users fill in their own commands.

Like the XAC, the Adaptive Gaming Kit’s box is accessible. The brown cardboard box containing the package doesn’t have tape or wrapping. Instead, it has a one-peel pull tab that’s easy to rip off. The Adaptive Gaming Kit’s product box does not have security tabs. It is held together by a hook and loop attachment (via velcro). Like Ikea instructions, the user manual only uses pictures. This makes it simple for users from all over the world to follow the instructions. You don’t need tools to open anything inside the box. Everything slides in and out. The box also doubles as a storage unit for the device.

“The Logitech G Adaptive Gaming Kit is designed to be the perfect companion to the Xbox Adaptive Controller, giving gamers the necessary tools they need at a more affordable price point,” says Ujesh Desai, vice president, and general manager of Logitech Gaming. “It also supports our commitment to inclusivity and diversity in gaming, because fundamentally we believe that life is more fun when you play, and everyone should be able to experience the joys of play.” 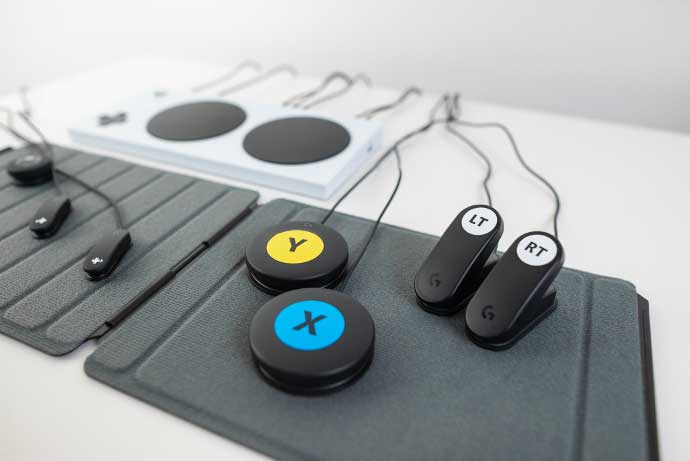 “We believe that technology has the ability to empower all of us,” said Phil Spencer, executive vice president of gaming at Microsoft. “With the addition of Logitech G’s Adaptive Gaming Kit, together we are able to push the boundaries of what technology can do in a concerted effort to be inclusive of everyone around the world.”

“The goal of AbleGamers is to find a way for people with varying abilities to play video games,” said Steve Spohn, chief operations officer at AbleGamers. “Everyone’s needs are different, and the Logitech G Adaptive Gaming Kit delivers a wide range of configuration options to make gaming a possibility for all. We appreciated the opportunity to work closely with Logitech G on the design of this kit and look forward to continuing our partnership in the future.”

According to Logitech, the Adaptive Gaming Kit is only the beginning. The company plans to reveal more accessible products in the near future. Unfortunately, they didn’t tell me when we could expect such an announcement. But the fact Logitech plans to continue down this route is good news in and of itself.

The Logitech G Adaptive Gaming Kit will be available on Logitech G’s website and through select Microsoft retail stores later this month for $99.99. It makes a perfect gift for anyone who owns the Xbox Adaptive Controller. For more information, make sure to check out Logitech’s site, blog, and Twitter account.