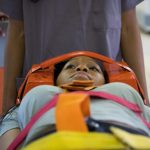 Spinal cord injuries caused by accidents, violence and disease paralyze from the neck down more than 5,000 people every year. In the first few months after injury, some people regain some movement and sensation in their limbs. Those who do not show improvement in the first few months are unlikely to ever recover.

Now, a team of researchers led by Washington University School of Medicine in St. Louis is launching a phase 2 multicenter clinical trial to assess whether surgically rerouting nerves can restore hand and arm function in people who have suffered spinal cord injuries in their necks. Previous small-scale studies have shown good to excellent results in many surgically treated patients.

“If you ask people with quadriplegia – paralysis of both the arms and the legs – what function they’d most like to get back, they’ll tell you hand and arm function,” said principal investigator Wilson “Zack” Ray, MD, an associate professor of neurosurgery, of biomedical engineering and of orthopedic surgery at Washington University. “It’s more important to many than bladder and bowel control, sexual function or walking. If you have control over your arms and hands, you can get into and out of a wheelchair by yourself, use a cell phone, feed yourself. It gives them a measure of independence. Not everyone who has had the surgery has regained these abilities, but some have.

“In the phase 1 trial we conducted, some people had very profound, dramatic improvements and did very well, and others had very minimal functional improvements that didn’t add to their independence,” Ray continued. “What we hope to do with this phase 2 trial is determine who is most likely to benefit from this procedure.”

The clinical trial is being conducted at medical centers affiliated with seven universities across North America – Washington University, Stanford University, and the University of Utah, of Michigan, of Calgary, of Pennsylvania, and of Texas – because no single site has enough eligible patients. Funded by a $3.5 million grant from the U.S. Department of Defense, the trial will enroll 70 people who were paralyzed by a spinal cord injury in the neck within the last three years, and have seen no improvement in their abilities in the past three months.

Each participant will undergo surgery to attach a nerve from above the site of injury to nerves below the site of injury that connect to muscles in the hands and arms. The patients then will participate in regular physical therapy for the next two years. Every six months, the researchers will measure participants’ ability to extend and turn their arms and grip with their hands. By analyzing the results of the surgery in a large group of people, the researchers hope to identify the optimal time after injury to perform the procedure, which kinds of injuries are best treated with this approach, and other factors that affect how much hand and arm function people regain.

Participants are needed at all seven sites. For more information, please contact Linda Koester at 314-362-7368 or koesterl@wustl.edu. Further details about the study can be found on ClinicalTrials.gov (ID# NCT04023591)