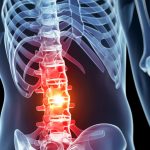 In experiments on rats with spinal cord injuries, the rodents improved their walking ability following treatment.

Researchers have demonstrated a novel method that might regrow nerve cells at the site of spinal injuries.

Writing in the Journal of Neuroscience, scientists at the University of Aberdeen in Scotland delivered a treatment of hydrogel to rat nerve cells in a cell-culture dish.

The hydrogel contains a substance — a soluble agonist called S-220 — that activates a molecule called Epac2. Previous studies had shown that Epac2 is heavily involved in nerve growth during embryonic development.

Due to the nature of the hydrogel, the drug is released slowly, which can provide a scaffold that physically supports injured nerve cells during the regeneration process.

After the team found that the hydrogel successfully activated Epac2, they proceeded with stage two, administering it to rats with spinal injuries. The hydrogel significantly enhanced axonal outgrowth across the lesions and the rats themselves showed significant improvements in their ability to walk.

“This is something that other researchers have tried around the world in many different ways, but we found that our method actually works and is also very efficient,” said Dr. Derryck Shewan of the Institute of Medical Sciences at the University of Aberdeen.

That’s not all. The Epac2-activating drug not only ‘turbo-charged’ the injured nerve cells, promoting regeneration, but it also significantly reduced the inhibitory nature of the injury site, further enhancing recovery.

“The injured spinal nerves not only regenerated more robustly, they sensed the surrounding environment was not as inhibitory anymore, so the damaged nerves could more successfully regrow and cross the injury site,” said Dr. Guijarro-Belmar, co-author of the new study.

Spinal cord injuries can be devastating, potentially paralyzing patients below the site of injury. Currently, there is no cure for such damage to the spinal cord. But, in the future treatments based on self-assembling hydrogels injected in the spinal cord could provide speed up recovery and replace invasive surgery.

Elsewhere, scientists at the University of Michigan devised a nanoparticle solution that prevents spinal scars from forming, as well as boosts the immune response to promote healing rather than cause damage to nerve cells. In combination with this hydrogel therapy or other similar ones, it may prevent paralysis.

“Repairing the damaged spinal cord remains one of the greatest challenges in medicine,” said Mark Bacon, Executive and Scientific Director from International Spinal Research Trust who partly funded the research.