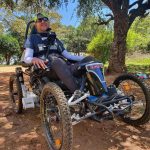 A QUADRIPLEGIC man has cycled 250 miles across Kenya using a motorised quad bike — that he steered by using his chin.

Inspirational Andy Walker MBE, who was paralysed in a diving accident in 2006, took on the monstrous trek through Rift Valley to Lake Victoria as part of a charity cycle challenge.

He completed the gruelling journey using a specially adapted quad bike that allowed him to steer using his chin.

Andy, 42, combatted intense heat, pot holes and arduous rural roads to cycle for eight to 10 hours a day to raise funds for the charity Regain, which supports people who have become tetraplegic through a sports injury.

The charity helped Andy, a former competitive swimmer, when he became paralysed from the neck down after the diving accident in Goa, India.

Andy, who was awarded an MBE for his services to disability charities, joined a group of cyclists and hand-cyclists completing the rural trek in October last year.

He admitted the trip across Kenya was his toughest challenge so far as he battled the steep gradients of the Rift Valley.

He said: ‘It was exhausting, I was cycling for eight to 10 hours a day.

‘I felt like I’d done five rounds with Tyson Fury by the end of it. There were times when I’d struggled, it was really hard, it was scary, but I loved it.

‘It was three days that were incredibly tough. I remember thinking I might crash at one point, I was totally tired.

‘I wanted to prove to people with injuries or struggles with life that you can overcome physical challenges with positivity.’

The expedition took its toll on Andy, who cannot regulate his body heat due to his injuries.

He added: ‘I thought my body might have given up, it was really hard. I wanted to push the limits of the injury and push my own limits.

‘Regain is truly one of the world’s most unsung charities, they make such a huge difference to the lives of people living with a high-level spinal cord injury.

‘They helped to transform my opportunities and attitude.

‘They have helped me overcome every challenge and aspect of living with a spinal cord injury — a wheelchair, a mentor and life-changing advice.

‘The fact that I was doing it for them kept me going through the dark times.

‘I’d never cycled that distance before, but there was no way I was going to give up and not complete it.’

Andy, of Oldham, Greater Manchester, only survived his accident because he was spotted by two friends who pulled him to safety.

He hit a rock when he went diving and broke his neck, which left him unable to use his limbs.

Doctors gave him a one per cent chance of survival, but Andy refused to give up.

He was moved to a specialist hospital in Delhi, where he had a major operation to realign his spine, and spent a further eight months at Sheffield Northern Hospital.

Andy has since set up a motivational-speaking company, called Living Your Dreams, to help inspire others to live life to the full.

He has raised more than £200,000 for charity and was awarded an MBE for his services to people with disabilities in 2019.

‘I try to support people and that’s what the challenge was all about, raising money and awareness for such a great cause.

‘I’ve had so much support from my family and from the charity, so if I can help somebody I will.

‘I had done all sorts of stuff before, my main aim has been to prove that life goes on.’