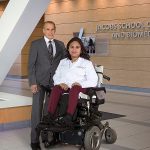 Farzana Ali learned many important skills throughout her four years as a medical student in the Jacobs School of Medicine and Biomedical Sciences. But to the many people who came in contact with her along the way, it was she who was teaching valuable lessons — in patience and perseverance.

Ali first dreamed of becoming a doctor as a child growing up in Bangladesh and later started on the path as an undergraduate student at Stony Brook University after her family immigrated to the United States in 2002.

But the journey took a tragic turn three years later when a drunk driver struck her family’s vehicle and Ali suffered a spinal cord injury. Her sister and aunt were killed.

“I had some doubts right after my spinal cord injury, but in my heart I knew I still wanted to be a doctor,” she says. “But the questions I had were about if it would actually be possible for a person with such a high level of injury to fulfill the requirements of becoming a doctor.”

Her focus was on recovering and getting integrated back into the community, but she knew a long road lay ahead.

“When I left the hospital, I had to go to subacute care in a nursing home, and I was a quadriplegic in a motorized wheelchair,” Ali says. “I needed extensive support for my daily activities, but that actually motivated me to work harder to get out of there.

“I thought that even if I could not go home, I would just go back to school and resume my education and live on campus. I was so dependent on others, I wanted to be more independent, and I saw education as a way to get back to my normal life.”

One of Ali’s first contacts at the Jacobs School when she interviewed for admission in 2016 was Charles M. Severin, former associate dean of medical education and admissions.

“From the beginning, he made an attempt to make a connection with me and the family members of mine that were present,” she says. “It made me feel at home. It just set the tone for a wonderful day and made me not be nervous despite being in a new environment.”

During the interview process, which she describes as “very open and honest,” Ali says a retired faculty member showed interest in her other skills and the languages she had learned — she speaks five fluently — rather than focusing on her disability.

“When I met with Dr. Severin, his primary focus was what a student like me might need to succeed in an environment like UB,” she says. “It was such a unique experience after coming from so many other interviews. It just stood out to me, what I could expect from the UB community.”

Based on her application and interview, Severin says the admissions committee saw a woman who had the “brain and heart of a physician.”

“Between her academic performance and MCAT score, she convinced everyone that she could handle the volume of information presented in our modules and pass her licensing examinations,” he says. “This told us she had the ‘brain’ of a physician.”

After reading the essay she wrote in her application and reviewing her life experiences, Severin says the committee was convinced she would display empathy with patients and earn their trust.

“It was equally important that we determine she had the ‘heart’ of a physician,” he says. “Furthermore, we saw a woman with an unwavering commitment to becoming a physician. In spite of what happened to her, she had a very positive attitude that we hoped her classmates would witness.”

David A. Milling, senior associate dean for student and academic affairs, recalls conversations he had with Severin after Ali was admitted. He says they focused on making sure the school put in place all of the necessary steps to provide accommodations in both the clinical and preclinical tracks that she would be engaged in.

“Just in terms of laying the groundwork, meeting with course coordinators and looking at access issues at the various hospitals, making sure that connectivity for things such as her iPad were in place,” he says.

“We had to make sure her personal aides were certified and HIPAA compliant in the hospitals and had the appropriate authority and access to accompany her,” Milling adds. “All of those things had to be in place to ensure that she was successful.”

“She is tenacious,” he says. “Her quiet self-confidence is just remarkable in terms of how she carries herself and shows everyone through her intellectual ability that she is willing to put in the work to do what it takes to be the best physician that she can be.”

Powering through the obstacles

Severin says his interactions with Ali were eye-opening in many respects.

“I can honestly say that I have learned over these past four years that if an individual has a goal they truly want to achieve, absolutely nothing will stop them from accomplishing this goal,” he says.

During final examinations in several of her clerkships, Ali was required to examine standardized patients in the Jacobs School’s Margaret L. Wendt Foundation Clinical Competency Center, subsequently record what she observed and ultimately diagnose their medical conditions.

On some of those occasions, acting as an intermediary, Severin helped Ali examine the patient. Because of her physical disability, she needed Severin to hold the diaphragm of a stethoscope to a patient’s chest so that she could hear their heart and lungs, or she asked Severin to palpate/percuss an abdomen to determine if any organs were enlarged.

“That was my only role. She was the one that ultimately assessed the patient’s medical condition,” Severin says. “All I did was — for a moment — become her hands. She had the more difficult task of assessing the medical condition and subsequently determining a treatment plan.

“To actually see someone with Ali’s limitations successfully accomplish this was amazing to me. Time after time, I saw her drive to succeed.

“She taught me to never prejudge or underestimate what an individual can accomplish,” Severin adds.

For her part, Ali says the entire UB community has been very supportive of her during her four years of medical school.

“It was more than I expected from a medical school,” she says. “I came here to be of service and to contribute as much as I can, but in the process I got so much more in return. I got so much love and care from the entire UB community, and that has been very fulfilling for me.”

Severin points out that one of the Jacobs School’s primary missions is to foster “a cooperative atmosphere.”

“The actions of everyone these past four years is an example of this mindset. After Farzana was accepted to our school, we wanted to ensure that she would receive the same education as the other students in her class,” he says. “Furthermore, we wanted her to know that she received the same education.”

“Every module leader, clerkship director, faculty and staff member anticipated potential problems due to her disability and made adjustments without compromising her education,” Severin says. “Everyone at the school accepted the challenge of doing their part to ensure she would receive a quality medical education.”

Several other UB offices played a major role in providing accommodations for Ali during her time in Buffalo — including Accessibility Resources, Facilities Planning and Design, Campus Living, and Parking and Transportation Services.

“I have always felt that everyone at this university wanted Farzana to succeed. I think they all deserve some credit in her success,” Severin says.

Another essential component in Ali’s journey to becoming a graduating member of the Jacobs School’s Class of 2020 is her mother, Shamsun.

She suffered severe brain and leg injuries in the 2005 car accident that injured Ali, but she eventually made remarkable recoveries.

“She is very determined and hardworking, which I think contributed to her recovery process, and that also encouraged me to work harder,” Ali says.

Shamsun Ali was working as a quality control officer at an electrical engineering firm on Long Island, but after Farzana was accepted into the Jacobs School, she retired from the position to move to Buffalo with her daughter.

“I am truly grateful for that because she loved her job, and it was a great sacrifice on her part,” Farzana Ali says. “She has been constantly present in not only my personal care needs, but also when I needed things done to be ready for school. Every evening we go over the things that need to be set up for my next day at school.”

Milling says he considers Ali a true trailblazer at the Jacobs School.

“In my opinion, she is a role model in terms of her work ethic, her professionalism and her ‘can do’ attitude,” he says. “She knows what she wants and is always willing to stretch the limits on what she can do. She has taught us all important lessons throughout her time here.”

Interest in AI use in diagnostic radiology

As laser-focused as Ali was throughout medical school, she is equally clear about her future.

She is returning to Stony Brook to complete her doctoral degree in biomedical engineering and plans to pursue a career in diagnostic radiology.

“I am very passionate about programming. I grew up playing video games and was always fascinated with the coding, programming and graphic design that went into them,” she says.

“I was also fascinated by the human body, which made me choose the medical profession. I felt like biomedical engineering is a path to combine both of my passions.”

As she learned about programming and the computer-aided diagnostic process, it sparked an interest in the field of radiology.

“It is very adaptive to innovation, technology and programming advancements. So I feel like with my computer skills, I can be a valuable member in the radiology community,” Ali says. “And my ultimate goal is to be a female leader in diagnostic radiology.”

“I want to advance the field of diagnostic radiology so that physicians are more comfortable in using artificial intelligence and more knowledgeable about the value in using computer-aided diagnosis in medical imaging.”