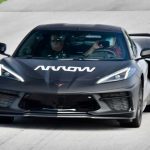 In 2000, Indycar racer Sam Schmidt was doing a testing run at Walt Disney World Speedway when he spun out of control and crashed, severing his spinal cord between his 3rd and 4th vertebrae.

He had gone from being a race-winning Indycar League driver to a quadriplegic in the space of a moment. However, he was determined to keep racing and formed an Indycar racing team just 14 months after being paralyzed. That team was Schmidt Peterson Motorsports.

Fast forwards almost a decade, and after achieving sponsorship from Arrow Electronics, a major racing team showed interest in joining forces. That team was McLaren, and they formed Arrow McLaren SP.

Throughout his paralyzed life, however, Sam has never been one to give up. Partnering with Corvette and his team sponsor Arrow Electronics, he first drove a modified C7 Z06 in 2014 that was semi-autonomous, using head movement and a bite sensor to determine steering, acceleration, and braking. 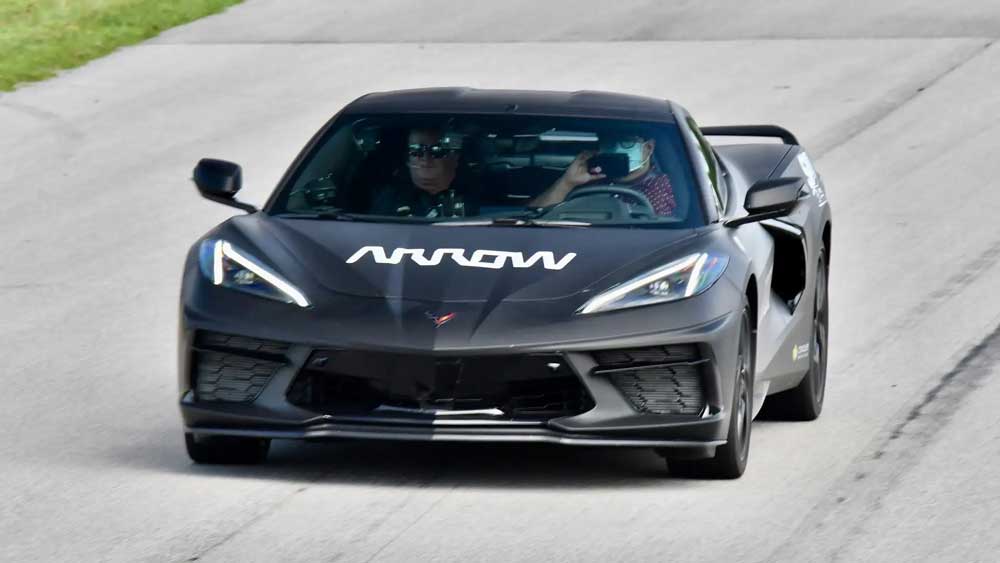 That was SAM (Semi-Autonomous Motorcar) I. Now, he has driven SAM III, a modified Corvette C8, and took a reporter from TheDrive for a few laps. 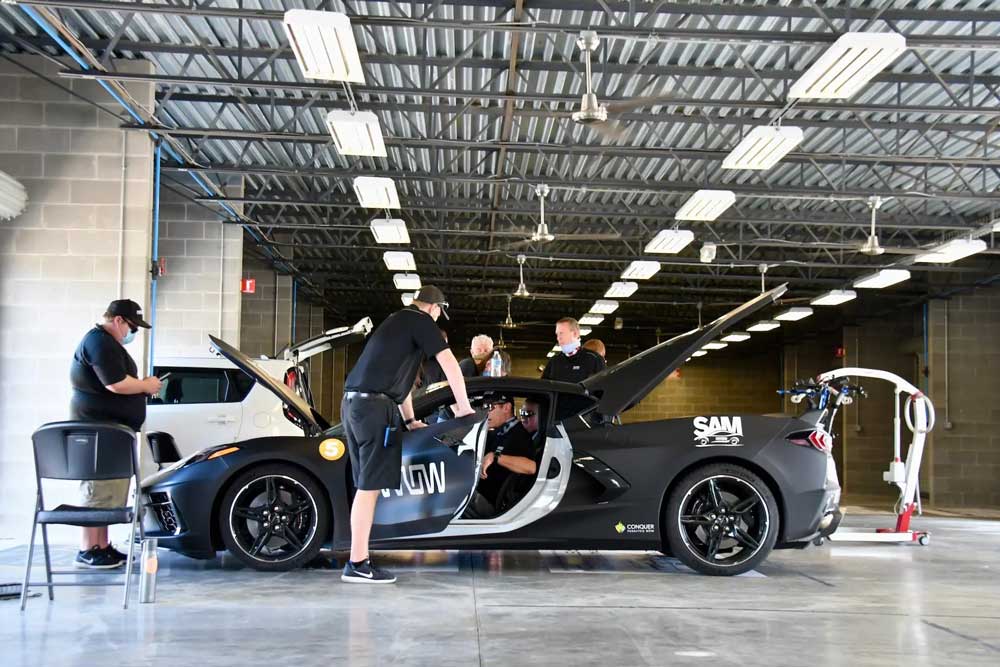 Using onboard computers that house advanced AI, located in the trunk and frunk of the C8, six cameras track special sunglasses that Sam wears to control the car. The top four cameras follow small IR spots on the glasses, much like with a virtual reality headset, then compare them to the AI program and turn the wheel or accelerate based on a specific set of parameters thousands of times per second. 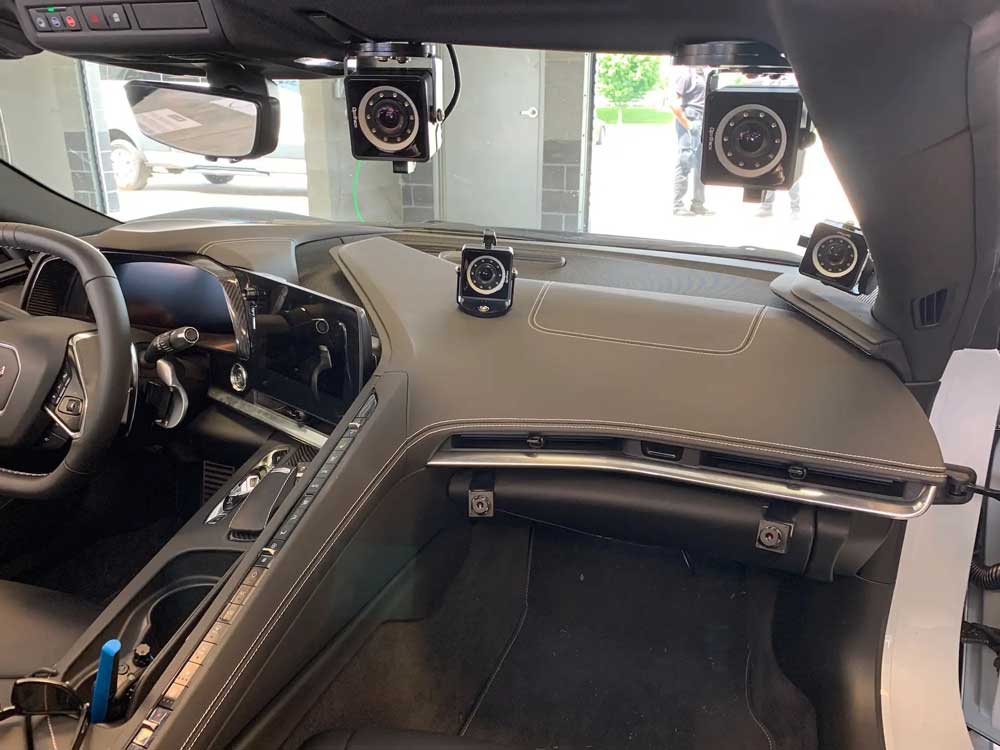 The bottom two cameras are 3D cameras that capture a real-time “landscape” of Sam’s face, and the AI is trained to follow his nose to verify a centerline for steering inputs. 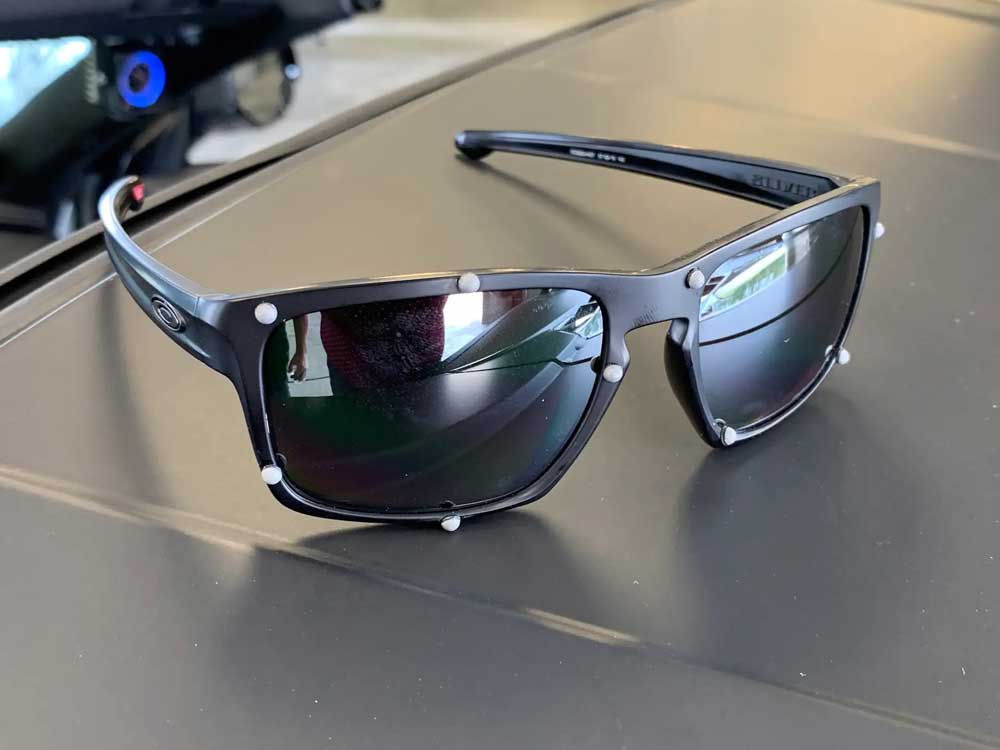 Lastly, he has an air straw in his mouth that follows a “sip and puff” sensor system. Puff to accelerate, sip to brake. 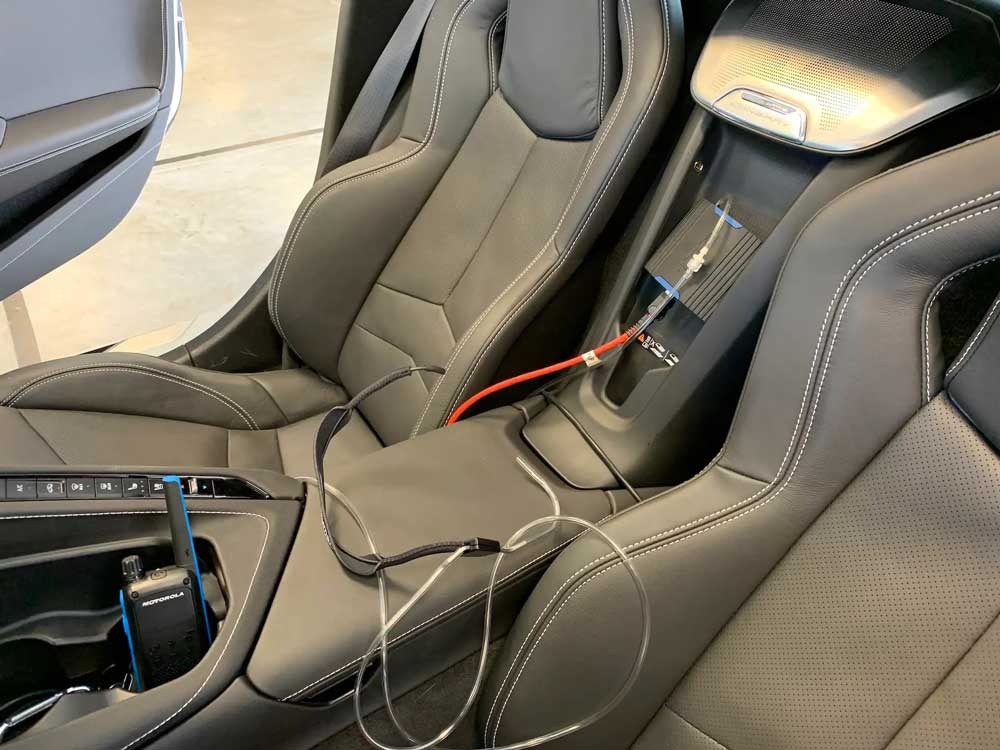 In a strange departure from the previous C7 Z06 SAM I and SAM II, Sam drives SAM III from the passenger seat. This allows a co-driver to have access to the stock wheel and pedals in case the system malfunctions in any way, or if Sam asks them to drive. 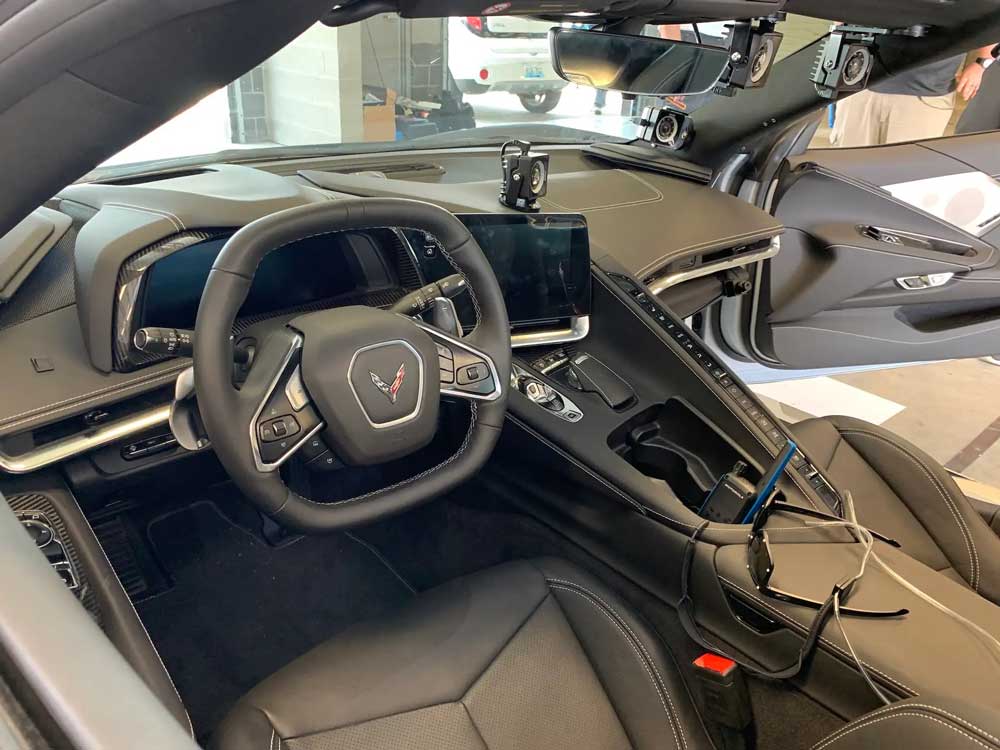 However, Sam, despite promising to “Take it easy” on the first lap with his co-driving reporter, took the C8 to task and was going 110 MPH down the main straight at IndyCar’s Putnam Park private road course and test track. He was also cornering at 1.25 G’s and was following racing lines able-bodied drivers would have been jealous of. 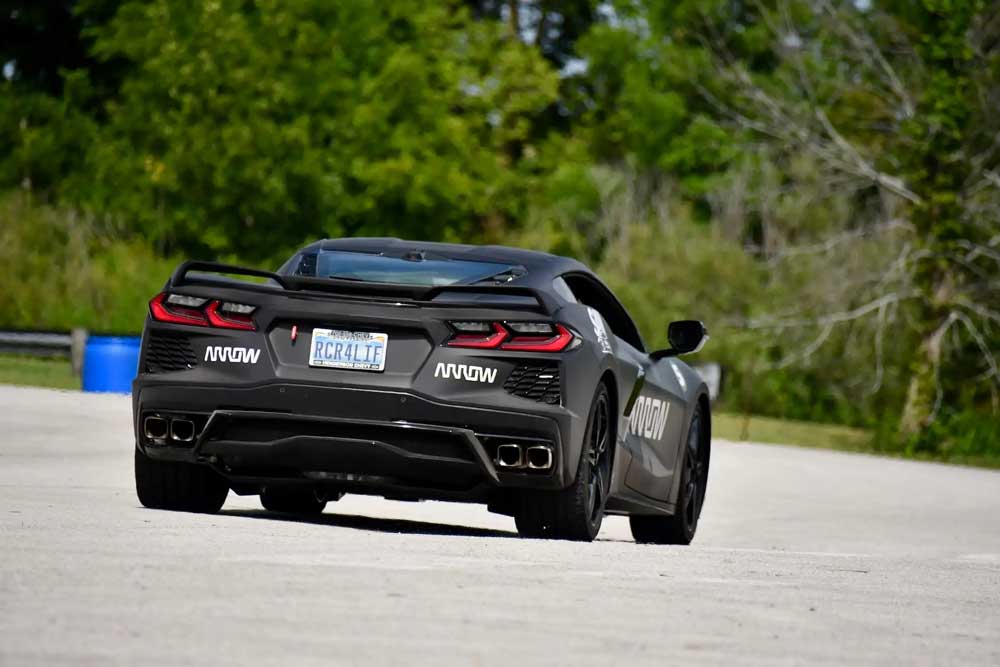 What it means, however, is that there is hope out there for quadriplegics to drive again, or for the first time, using cars modified much like vans and others are modified with hand controls for paraplegics. 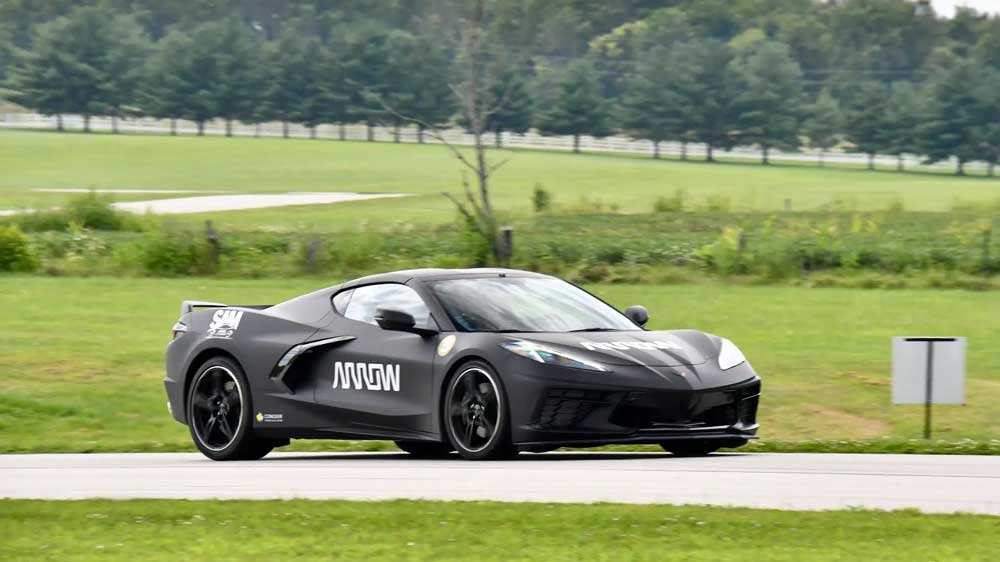 Or, as Sam puts it, “This technology could eventually help a disabled person simply drive themselves to work—that’s the one thing most disabled people want to do…” And as such, it is his charitable organization’s goal (Conquer Paralysis Now) to someday provide an affordable form of the technology to other quadriplegics so that they can regain some form of autonomy.