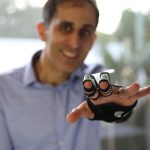 The seeds of the KinoGlove project were sown 17 years ago, when biomedical engineer Puya Abolfathi began his PhD at the University of Sydney in 2003.

“We intended to create a rehabilitation glove — a soft glove that people with spinal cord injuries could wear,” Abolfathi told Create.

“We envisaged it would have artificial muscles within the glove, to enable users to move their fingers.”

Abolfathi developed a prototype for the glove, which won him a Eureka Prize in 2004. The project subsequently developed into the Exoflex, a portable hand therapy device designed to bring movement to paralysed and recovering hands. 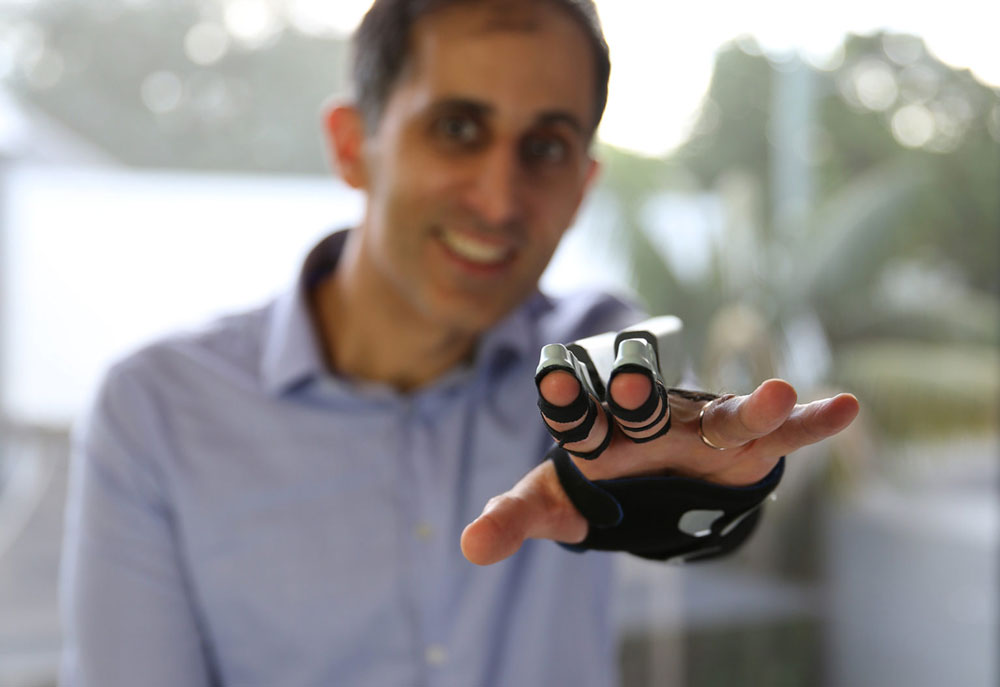 “The Exoflex was designed to assist people post-surgery, post-trauma and post-injury,” Albolfathi said.

The project officially kicked off in 2007, and by 2016 the glove was at a stage where it could be manufactured. The device also saw Abolfathi win a National Disability Award for Excellence in Technology that same year.

While the hand therapy tool was expected to hit the market in mid-2017, ultimately it wasn’t to be.

“The device got all the way up to manufacturing but not over the line,” Albolfathi said.

“The project was marked by two nice awards, and we thought it would end there.”

But the story didn’t end there.

Two engineers with a passion for impactful projects, the pair started negotiating the Exoflex IP in 2019. They now have ambitious plans to use the technology in a new project: the KinoGlove.

“The KinoGlove will use parts of the Exoflex, but will be significantly miniaturised and redesigned to be able to fit into a glove form, as opposed to an exoskeleton,” Abolfathi said.

“We’re now using this work of almost 20 years and a dream that started with helping people with paralysis to get movement back.”

A soft robotic garment designed to be worn on paralysed hands, the KinoGlove will enable paralysis patients to achieve hand function, triggered by the user’s own thoughts.

“The KinoGlove will replicate the function of the hand,” Abolfathi said.

“We will pick up signals from the brain in various ways, and send that to the glove. It is designed to effectively bridge the gap between the brain and the hands.”

The new glove will also be considerably lighter than its predecessor.

“The genius of the new design is that we can reduce the number of motors while not giving up on any flexibility of movement in the front design.”

The team is currently experimenting with their new design, for use with spinal cord injury patients.

“The KinoGlove is designed to effectively bridge the gap between the brain and the hands.”

“We have the design worked out, but there’s quite a bit of development work still left to do,” Abolfathi said.

“In about a year, with adequate funding, we could have the prototype complete for use in clinical trials.

“We would then prove the effectiveness — the clinical benefits and the consumer benefits that would be necessary to complete the regulatory compliance … I would say, realistically, we’re at least three years away from truly being in the market.”

With the device potentially reducing the amount of one-to-one care that a paralysis patient would need, the device could have considerable benefits for the disability sector.

“There’s a real cost benefit we can argue for here,” Abolfathi said.

“On top of that, the independence someone has for something like this is priceless. We’ve seen this and heard this many times, after interviewing people with high level spinal cord injuries.

“Even if the device doesn’t take away the need for a carer, it might mean that you don’t have to ask the carer for a glass of water or to turn on your phone. That idea of providing greater autonomy and dignity — that’s the idea of the technology.”