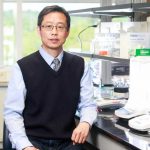 Cells called astrocytes normally support our neurons, and now scientists are working to reprogram the star-shaped cells into neurons that help reconnect the brain and body after a spinal cord injury.

“We are at the stage of optimization. We know this reprogramming is feasible and we can do it,” says Dr. Hedong Li, a molecular neuroscientist in the Department of Neuroscience and Regenerative Medicine at the Medical College of Georgia

“Right now the state of really the entire field is: How do we make this a feasible approach?” he says. “How do we make this optimal in order to translate this into a clinic so it can lead to functional recovery following a spinal cord injury, brain injury, Alzheimer’s, and all kinds of neurodegenerative disease. We have a lot to do.”

Li is principal investigator on a two-year, $423,000 R21 Exploratory/Development Research grant (RNS119732A) from the National Institutes of Health that is enabling his team to use a construct he has engineered to aid repair of an injured spinal cord by making new neurons available.

The construct takes advantage of the common adeno-associated viruses’ ability to target a cell, in this case to deliver to astrocytes a gene that will increase the amount of NeuroD1 present. NeuroD1 is a neuron-specific transcription factor that helps turn on genes directly related to stem cells becoming neurons during our development. Part of the package is also an element that will make NeuroD1 more responsive to microRNA-124, which is skilled at turning genes down and plays a critical role in the formation, differentiation and maturation of neurons, once astrocytes become neurons.

The pairing seems logical because Li and his team have shown NeuroD1 can convert — one to one — the multitude of reactive astrocytes that show up after an injury into new neurons in the brain and spinal cord.

His new construct should ensure a more natural, healthy balance of excitatory neurons, which promote neuron firing so we can do things like walk and think, and inhibitory neurons, which suppress excessive firing which can result in problems like seizures.

Li was the corresponding author of a paper published in December 2020 in Frontiers in Cell and Developmental Biology that reported NeuroD1 converts astrocytes into neurons following a spinal cord injury, and that these converted neurons could mature and become part of the spinal cord wiring — even long after an injury. However, the process results primarily in excitatory neurons.

Li has evidence that part of the reason for the resulting paucity of inhibitory neurons is that while high levels of NeuroD1 are needed to make the desired reprogramming happen, levels remain high afterward. Normally following development, NeuroD1 levels are low and what those persistent high levels will do to the new neurons is another unknown.

“We want to get things back to normal,” Li says, which includes reducing NeuroD1 levels after the new neurons are produced. “We think it’s a smart strategy. The R21 grant is basically to test that idea,” Li says. If he is right, they will have, not the only way, but a working way to retool an injured spinal cord.

The new grant is enabling analysis of the efficiency of his construct in an injured spinal cord, including the makeup of the resulting neurons and whether the new neurons improve function. The long-term goal is a treatment for patients.

He and Dr. Sergei Kirov, neuroscientist, and director of the 2-Photon Microscopy Core in the Neuroscience Department, have watched in three dimensions as NeuroD1 transforms astrocytes into neurons in the brain over a couple of weeks, and seen the reactive cells change shape and become a smaller cell body with long processes, or synapses, that can connect with other neurons, toward the end of week two. They are working on a way to also view this transformation within the thin, cylindrical — about the circumference of your little finger in humans — spinal cord.

While other scientists focus on regenerating broken axons — the long, slender nerve fibers that conduct electrical activity away from a neuron — through the spinal cord injury site, Li and his colleagues are working on more of a workaround, like the roundabouts popping up on roadways to help keep traffic moving.

Like those roundabouts with our vehicle speed, the workarounds may slow the speed of neuronal communication a bit, but should reestablish those lost connections, Li says.

Non-neuronal cells in the brain and spinal cord, generally called glial cells, already outnumber neurons about 10 to 1. After an injury, astrocytes increase in number and become more reactive but the neurons they are there to support tend to be more vulnerable to injury and death and do not spontaneously regenerate in response.

Astrocytes’ proliferation and ramped-up stance in the face of injury is likely a function of their natural protective role of neurons, as immune cells move in, inflammation increases and glial cells react to multiple factors produced, Li says. Astrocytes even literally change shape, deposit a glue-like extracellular matrix around the injury site, likely with the idea of helping contain the injury like a tourniquet, can stop bleeding, but ultimately the glue becomes the foundation and astrocytes themselves become part of a scar, which can further impede communication through the injury site.

That’s another way his construct comes in. In this scenario, the need for new neurons is clear but reducing a large number of now hyperactive astrocytes in the process likely is an additional benefit.

“In the acute phase right after injury, you want astrocytes to be like that,” Li says. But they tend to overdo.

“The (glial cells) just want to prevent the injury from becoming bigger. I think the glial cells don’t know how to repair. In order to restore the function of this area, we need more neurons,” he says. Astrocytes seem like a logical source since they are already in the right place and in abundance.

“Every cell has the same genome, all the sequences are there, you just have to turn on the right program,” he says, adding that while the transition is not always easy or even doable, in theory with just the right combination of factors, you can reprogram any cell.

Astrocytes’ usual role in the central nervous system includes supporting the synapses, or extensions of neurons — and each neuron can have thousands of synapses — that essentially reach out to other neurons, releasing a chemical messenger called a neurotransmitter to excite the next neuron into action.

There is no cure or even good treatment for spinal cord injuries, even today, Li says. The Food and Drug Administration in 1990 approved the high-dose hormone treatment Methylpredinsone steroid, which is thought to reduce inflammation and has been shown to improve motor and sensory function if given within eight hours of a spinal cord injury. It also has a host of potential lasting side effects including aggression, blurred vision dizziness, irregular heartbeat or pulse, and even mood changes and trouble breathing. “We need better treatment,” Li says.

Li initiated his ideas while working in the lab of Dr. Gong Chen, professor of biology, and Verne M. Willaman Chair in Life Sciences at Penn State University. Chen’s team has shown that neuron production from astrocytes can happen in the brain in models of Alzheimer’s, stroke, and brain injury. Li came to MCG from Penn State last year.

Toni Baker is the Communications Director at the Medical College of Georgia at Augusta University. Contact her to schedule an interview on this topic or with one of our experts at 706-721-4421