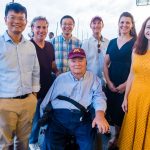 Those who don’t personally know someone with SCI have almost certainly heard the stories of people such as Teddy Pendergrass, an R&B singer that was injured in a car crash, or Roy “Campy” Campanella, the Hall of Fame catcher for the Brooklyn Dodgers who also was injured in a car crash. Likely one of the most famous stories is that of Christopher Reeve, the actor who played the Superman during the ‘70s and ‘80s and suffered an SCI after he fell off his horse during an equestrian competition.

Following an injury, people often experience neuropathic pain – pain that arises if the nervous system is damaged – and feelings of isolation, among many other symptoms. So how do survivors overcome these hurdles? In a word: resilience.

“For someone with a cord injury, your margin for surviving even small mistakes when it comes to your health is really thin,” said James S. Krause, Ph.D., professor and associate dean for research in the College of Health Professions. “So we see people die early. But those who survive tend to be people who are more likely to take better care of themselves, to be employed, to have good relationships, and they become resilient. It’s surprising how resilient people are.”

Resilience is a character trait that allows people to adapt and thrive in the face of difficult circumstances. It is the inner fortitude that enables people to cope with stress, handle adversity and rebuild their lives following a traumatic event. Krause is a shining example of a resilient survivor.

Originally from Minnesota, Krause, who also serves as the scientific director of the South Carolina Spinal Cord Injury Research Fund and director of the MUSC Center for Rehabilitation Research in Neurological Conditions (CRRNC), was injured while diving into shallow water as a teenager, which left him paralyzed. Before the injury, he was not really interested in school but liked to be outside and play baseball. After the injury, however, with the help of his sister, he changed his focus, becoming a better student and ultimately dedicating his life to researching spinal cord injuries.

“I just passed 50 years post-injury,” said Krause, who held a celebration in July for his long survival. “At the time, we would have never dreamt that I would have lived this long. It was beyond comprehension, but nowadays many people reach that milestone.”

This increase in survival following an injury is largely due to ongoing high-quality research. Krause and his team have worked hard to develop tools for people – information to make them more aware of dangerous behaviors and activities in the hope of preventing emergency department visits – and influence policy makers.

While he hopes that these tools will lengthen SCI patients’ survival, several challenges remain. According to the World Health Organization, people with SCI are 2 to 5 times more likely to die prematurely than people without SCI. Furthermore, many of the consequences associated with SCI do not arise from the injury but rather hurdles to treatment, such as inadequate medical care and rehabilitation services as well as physical, social and policy barriers.

To address some of these concerns, Krause and his team have a long track record of investigating three major life domains: health and function, including opioid use and abuse among people with SCI; community engagement, such as a longitudinal study initiated in 1973, in which participants provide self-assessments about their quality of life as they age; and employment.

“I’m excited to look at the intersection of these three domains because people’s lives don’t occur in a vacuum,” said Krause. “Disability research requires multiple approaches in multiple life domains. That’s how we work. That’s what we strive for.”

Earlier this month, Krause received a $2.5 million grant from the National Institute for Disability, Independent Living and Rehabilitation Research to study the third life domain: employment. Importantly, this study focuses not only on raw percentages of employment among individuals with SCI but also the quality of that employment. For the first time, Krause’s team will compare salaries, benefits and promotions for individuals with and without SCI.

Researching cord injuries while having one himself, Krause often finds the spotlight directed at him. Having this type of injury gives him credibility that someone else might not have. People immediately recognize that he understands their situations; that it is also personal for him. But, he insists that the incredible work that he has done over the past decades is the culmination of work performed by a wonderful team of people who have dedicated their lives to working in the field of SCI or other disabilities. This work was also made possible with the help of a strong personal support network, particularly his wife of 28 years, Laura, who put her career goals aside so they could come to MUSC in 2002.

“My reason to go into this field is obvious – it’s natural to go into an area where you’ve been personally affected,” said Krause. “So I’m always really grateful to others who have chosen to work in this field.”

Founded in 1824 in Charleston, MUSC is home to the oldest medical school in the South as well as the state’s only integrated academic health sciences center, with a unique charge to serve the state through education, research and patient care. Each year, MUSC educates and trains more than 3,000 students and nearly 800 residents in six colleges: Dental Medicine, Graduate Studies, Health Professions, Medicine, Nursing and Pharmacy. MUSC brought in more than $271 million in biomedical research funds in fiscal year 2020, continuing to lead the state in obtaining National Institutes of Health funding, with more than $129.9 million. For information on academic programs, visit musc.edu.

As the clinical health system of the Medical University of South Carolina, MUSC Health is dedicated to delivering the highest quality patient care available while training generations of competent, compassionate health care providers to serve the people of South Carolina and beyond. Comprising some 1,600 beds, more than 100 outreach sites, the MUSC College of Medicine, the physicians’ practice plan and nearly 275 telehealth locations, MUSC Health owns and operates eight hospitals situated in Charleston, Chester, Florence, Lancaster and Marion counties. In 2020, for the sixth consecutive year, U.S. News & World Report named MUSC Health the No. 1 hospital in South Carolina. To learn more about clinical patient services, visit muschealth.org.

MUSC and its affiliates have collective annual budgets of $3.2 billion. The more than 17,000 MUSC team members include world-class faculty, physicians, specialty providers and scientists who deliver groundbreaking education, research, technology and patient care.