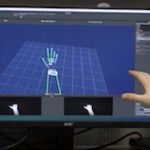 For people with tetraplegia—a condition in which all four limbs have lost motor ability—regaining independence is a top priority. Although there is no cure for paralysis caused by neurological disorders, robotic arms and exoskeletons may provide some assistance. Controlling these robotic devices, however, is a complex problem.

Researchers have experimented with voice control (which struggles to translate verbal commands into a three-dimensional space), brain-computer interfaces (which require complex surgery), and joysticks (which often mean multiple rounds of positioning for each arm segment).

Doug Weber, a professor in the Department of Mechanical Engineering and the Neuroscience Institute at Carnegie Mellon University, partnered with an international team of researchers to explore the possibility of using myoelectric signals—the electrical pulses associated with muscle contraction—to predict intended hand gestures in a person with tetraplegia.

Collaborators from Imperial College in London, the Battelle Memorial Institute in Ohio, and the University of Pittsburgh were involved in the project. The team’s findings were published in the Journal of Neurophysiology.

“A lot of the work that we do in the lab is focused on assisting people with the recovery of motor functions that are important for accomplishing daily activities,” Weber said. “We work at the intersection of engineering and neuroscience, trying to create devices that connect with functioning parts of the body and bypassing areas of the nervous system that are damaged by injury or disease.”

There are a variety of conditions and injuries that can lead to paralysis or loss of movement. Some, like stroke, affect the brain. Others, like spinal cord injuries, affect the connections between the brain and muscles. The traditional understanding has been that spinal cord injuries sever the connection, and signals don’t ever reach the muscles. The idea follows that people with tetraplegia would be unable to generate detectable myoelectric signals.

“We set out to challenge the notion that muscles paralyzed by spinal cord injury are incapable of expressing myoelectric activity, which indicates someone’s motor intention,” said Weber. “We used a sleeve embedded with 150 sensors that covered the entire forearm—casting a wide net in the hope of finding myoelectric signals that persist even in muscles that are too weak to generate physical action.”

This approach was tested in a 32-year-old man who suffered a spinal cord injury 14 years prior to the study. He has some limited movement in his wrist but his fingers cannot move. During testing, the participant was instructed to try mimicking a set of hand gestures, such as pointing with the index finger, that were displayed as prompts on a computer screen.

“We knew we were asking the participant to perform an impossible task, and thus we were pleasantly surprised to find that each (failed) attempt to move produced small but noticeable bursts in muscle activity,” said Jordyn Ting, a Ph.D. candidate in bioengineering at the University of Pittsburgh and lead author on the paper.

This means that the participant’s muscles were still connected to the brain, though those connections are weak. The strength and location of myoelectric signals depends on the individual patient and their unique injury—no two are exactly the same. Similarly, the signals can differ from what one would detect in a healthy person.

Despite the challenges associated with interpreting the signals, their presence suggests that they could be used to control robotic devices for assisting movement. Next, the researchers will use virtual reality to show patients that, despite the lack of movement, their muscles are communicating with the brain.

“That feedback, we believe, may help them get stronger, just like when we practice any other skill,” Weber said. “We know we won’t be able to cure paralysis, but if we can enable someone to express their intentions through this wearable sensor, then we’ve empowered them to operate assistive devices in a very natural way using just their muscles.”