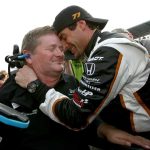 Since he was a child, Sam Schmidt had dreamt of racing at the Indianapolis 500.

In 1997, that dream became a reality, as Schmidt made his debut in the Indy Racing League. He would spend three years in the league and won his first ever race at Las Vegas in 1999.

“Life was perfect,” he told Insider.

Just months later in January 2000, however, Schmidt’s life was turned upside down.

“I was testing down in Florida for the upcoming season, and I crashed into the wall at 200 miles per hour,” said Schmidt. “I blew apart my vertebrae.”

Schmidt was left paralyzed from the neck down by the crash and doctors told his wife, Sheila, that he would only live for another three-to-five years — all of which would be spent on a ventilator in a nursing home.

Following his crash, Schmidt spent five months in the hospital. Soon after he left, though, he set up his own IndyCar team: Sam Schmidt Motorsports.

The team, now known as Arrow McLaren SP, made its debut in the Indy Racing League in 2001 and has since won nine races. The team has also competed in the Indy Lights since 2002, where it has enjoyed unrivaled success, winning seven championships.

Not content with watching from the sidelines, however, Schmidt was always determined to get behind the wheel again.

The American company developed what it calls the semi-autonomous mobility car — or, fittingly, the SAM Car — and the vehicle is controlled like no other in the world.

To steer, Schmidt wears a helmet fitted with motion-tracking sensors, which link to mounted dashboard cameras that then move the car’s wheels based on his head movements. To accelerate and brake, Schmidt exhales or inhales into a tube. To signal, he uses a voice command system.

He has a co-pilot in the car with him at all times who can take over controls using a conventional steering wheel, but only if needed.

“Everything in my life is pretty much done by somebody else,” said Schmidt. “But in the SAM Car, I am in complete control.

“Before my injury, that was the most normal thing in the world. I didn’t have that for 15 years, but now I have it again, it’s exhilarating. It’s so much fun.”

Schmidt drove the SAM Car — originally a modified 2014 Corvette Stingray — for first time in 2014 at the Indianapolis Motor Speedway.

In 2016, he then competed in the Pikes Peak challenge — a 4,720-foot, 156-turn hill climb in Colorado, dubbed the “greatest challenge in motorsport for both man and machine.” Schmidt finished only six minutes behind the winner in a regular car.

The SAM Car has since evolved greatly. Now a modified McLaren 720S Spider, the car is capable of reaching speeds up to 212 mph. The infrared cameras now respond to more nuanced head movements, while there is also vastly improved transitions between accelerating and braking.

Schmidt, now 57, drove the latest version of the vehicle for the first time earlier this year, and in June, he completed the Goodwood Festival of Speed’s iconic hillclimb in West Sussex, England.

“They’ve continued for eight years to update the car,” said Schmidt. “When I get in it now, the reaction time is zero. “When you move, it moves. It blows my mind away.

“Everything I’ve challenged Arrow with, from a driver’s perspective, whether it’s softening up the rigs, changing the steering curve, they’ve figured out a way to write the software to do it.

The SAM Car has changed Schmidt’s life, and he hopes it can for others, too

On top of helping him return to racing, Arrow has also aided Schmidt in his life away from the track.

He’s been able to drive his children on the roads of New York and Washington DC in the car, and he’s driven his wife across the Golden Gate Bridge in San Francisco.

In 2021, using an exoskeleton designed by Arrow that allows him to walk, Schmidt was also able to dance with his daughter, Savannah, at her wedding.

He called it the “best moment of his life.”

“I can’t teach my son how to throw a football. I can’t teach them how to drive stick shift. All of these things that I wanted to do as a parent were taken away, that was probably the hardest thing for me,” said Schmidt.

“But Arrow has afforded us opportunities to do a lot of things we never thought possible.”

As for the future, Schmidt wants to keep working with Arrow to improve the SAM Car and the company’s other technologies — both for himself and for others like him.

“For entirely selfish reasons, I want to keep driving, and go fast,” he said. “But what we’re seeing now, the applications can be as simple as getting people back to work.

“A lot of time, people with disabilities like mine just want to go back to work, put [food] on the tables for their family and be a productive member of society.

“They’ve been told throughout the entire process, you know, your life is pretty much over as you knew it,” he continued. “We want to try to unwind that and say, ‘What is your goal in life?’ and then try to use physical training and technology to achieve that goal.”

Inside Out | Grateful for an infection? In a way, yes

Paralyzed Man and His Wife Deliver Healthy Baby Courtesy of In...