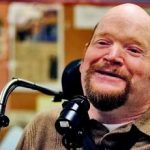 Scott Cannedy was on a secret mission with the Green Berets in 1985 when he suffered a spinal cord injury that paralyzed him for life.

Cannedy describes himself as a “C3-C4 quadriplegic,” which means his spinal cord was damaged at the third Vertebrae. He can only shrug his shoulders and move his head. He uses his chin to steer his motorized wheelchair and has to have help to eat, shower and dress.

Despite his handicap, he still considers himself a happy, independent person. And on Monday, he was honored with a veteran appreciation plaque at the Jackson Center for Independent Living.

Glen Barr, the director of the center, said they wanted to celebrate Veterans Day by honoring Cannedy and the work he’s done for other veterans.

“We really appreciate all he does for others,” Barr said.

While veterans from previous wars are still struggling to be independent people, disabled veterans from the wars in Iraq and Afghanistan are experiencing the problems for the first time, Cannedy said.

“New vets are rediscovering problems we’ve known for a long time,” he said. “The (Veteran’s Affairs) seems so secretive. You don’t always know what people and services are available to you. You have to seek it out.”

“We serve all disabilities and all ages,” he said. “Whatever a person’s need, that’s our goal. It’s our job to fight for them until they get what they need. And we work for veterans, too.”

Cannedy is a volunteer at the hospital, where he works as a peer counselor for others who are paralyzed.

“When someone becomes disabled, there are a lot of stages they will go though,” Barr said. “And it helps if they have someone with them who has been through it all before.”

Cannedy said that after 23 years, he’s been through a lot and has fought to be where he is today. In addition to his work at the hospital, he also visits schools and talks with children about being in a wheelchair and the importance of sports safety.

“I want to try to prevent those choices that might lead to a broken neck or back, so they don’t become paralyzed,” he said.

He used to volunteer at the Jackson Center for Independent Living, and is still grateful for their work.

“I appreciate what they do here,” he said. “They are always fighting to keep people in their homes, keeping them independent. Glen and I are eternal optimists, so we’ll always hope tomorrow will be better. That’s what drives us both.”

AM General plans to begin making vehicle in 2010

Wheels in motion for new park