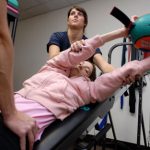 At the end of each year, the Times-Call checks in on area newsmakers from the past year and brings their stories up to date in the annual Where Are They Now series.

BOULDER — Marnie Ohlfs holds a ball above her head and moves into a sit-up. She repeats the exercise 20 times, then 20 more.

“I’m going to be a new person,” Ohlfs, 44, said on Dec. 6, as she did sit-ups at SCI Recovery Project, a Boulder center offering exercise therapy to those with spinal cord injuries.

Ohlfs suffered a spinal cord injury in a 2003 car accident that left her legs weak and uncoordinated and her hand muscles rigid. She has used a wheelchair ever since the accident but is determined to walk again.

In June, Ohlfs took her first steps with a walker. A therapist guided her foot, but she initiated the movement and performed the follow-through, she said. Since then, she has repeated walking a few steps in a walker several times.

But Ohlfs is struggling with an addiction to painkillers; her lack of confidence when she stands in a walker; and a lack of consistency in therapy, hampered by living in Parker, with the closest exercise-based therapist for spinal injuries in Boulder.

“I need all of these things to work together,” Ohlfs said. “If my mind isn’t where it needs to be emotionally and mentally, I am not going to be where I want to be physically.”

When the Times-Call first wrote about Ohlfs on May 6, the former Longmont resident was trying to raise $15,000 to go to San Diego for exercise therapy at Project Walk, another exercise-based therapy center for those with spinal injuries; at the time, she didn’t know about SCI.

In May, Ohlfs spent a month at Project Walk with husband Mike Ohlfs, 45, and their sons, Austin, 11, and Andrew, 9. She worked out for three hours, three days a week, doing gait training and exercises that strengthened her hips and core muscles. It was there she took her first steps.

“I enjoyed it immensely,” Ohlfs said. “I didn’t want to go home. Everybody is very positive about your recovery. It brought my spirits way up.”

Project Walk founder Ted Dardzinski told the Times-Call in May that most of the center’s clients don’t go home walking but do improve their physical condition.

“We don’t promise anything,” Dardzinski said.

After she returned to Parker, Ohlfs continued her therapy at SCI in Boulder with Dave Hart, SCI’s director and a personal trainer who had worked at Project Walk.

Toward the end of November, Ohlfs decided to try to stop taking the painkiller Vicodin, but severe withdrawal symptoms made it difficult to stop.

Her doctor prescribed Suboxone, a drug that will make withdrawal easier, but the process will take three or four months, she said.

Hart said Vicodin impedes Ohlfs’ physical progress because while on it she can’t feel which muscles she is engaging when she exercises.

Every time Ohlfs visits SCI, she begins with a leg press warm-up.

“If we can get the legs stronger, it will help circulate the blood better,” Hart said during Ohlfs’ Dec. 6 visit.

Hart has been working on improving Ohlfs’ hip stability and core strength. Since June, she has become more coordinated and has better control of her movements, Hart said.

More consistent therapy would help, he said; for the past few months she has only come to SCI twice a month.

“She is willing to try more things and push herself to the edge of failure,” Hart said. “With more therapies, getting off the medication, her results will drastically improve.

“We would like to help her reach her goals, whether it’s walking with a walker or walking.”

When he worked as a trainer at Project Walk, Hart said, he saw several people with spinal cord injuries graduate to a four-arm crutch or walker.

As for Ohlfs, she still hopes to be able to climb the stairs at home and tuck her two boys in at night.

“When I’m here (at SCI), my spirits are so much better than physical therapy,” Ohlfs said. “At physical therapy, they put a deadline on things. If you are not better in a month, they go in a different direction. Here, it’s like, ‘We are going to take you as far as we can take you.’ It doesn’t matter how long.”