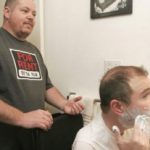 Ronald Griffin was meant to be a caregiver. Following in the steps of his mother and grandmother, he entered the industry straight out of high school. You can see his passion when he talks about his work. And his client, Michael Barnfield, says he sees it, too.

“Ron was created for this position,” Barnfield said. “He was born to do this.”

As a personal assistant, Griffin helps 26-year-old Barnfield with the day-to-day tasks that we often take for granted. Bathing, getting dressed, cooking and cleaning are just a handful of activities that Barnfield cannot do alone, because of his muscular dystrophy.

“He seeks out how to make life easier for me. He gives me independence,” Barnfield said.

While working with Barnfield for the past two years, Griffin has become much more than a caregiver. He moved next door to Barnfield, who is now more like family. They can even finish one another’s sentences.

“It’s almost like being married to somebody,” Griffin said with a laugh.

Griffin is one of more than 1,500 personal assistants that work for Arizona Bridge to Independent Living, a non-profit organization that offers programs to help people with disabilities live independent lives. In addition to the care-giving services, ABIL also provides peer support, home modifications and employment services.

“We serve probably around 2,000 people or more a year throughout Maricopa County with the (personal assistants) program,” said Phil Pangrazio, executive director of ABIL. “It’s hugely important, but all of our programs are very complementary to each other.”

Earlier this summer, ABIL named Griffin “Personal Assistant Services Employee of the Year,” a title that made him feel like his work had not gone unnoticed.

ABIL recently moved into the new Disability Empowerment Center of Arizona at 5025 E. Washington St. in Phoenix. The campus is expecting to house seven other non-profit agencies that serve people with disabilities, including the Arizona Center for Disability Law, Raising Special Kids, the Arizona Chapter of the National Multiple Sclerosis Society, Joni and Friends, the Statewide Independent Living Council, Arizona Autism United, the Arizona Spinal Cord Injury Association and PRN Medical Services. The campus is meant to be a spot for empowering people with disabilities, which is exactly what Barnfield thinks is needed.

“Most people think, ‘Oh they’re disabled. They just want to stay at home and not do anything,'” Barnfield said. “But people with disabilities want to get out and be independent. We want our independence so much.”

Griffin works full time at the Arizona Department of Economic Security between his morning and evening shifts with Barnfield, so his weekly workload totals more than 60 hours. But he said he wouldn’t have it any other way.

“The happiness I get out of it, is making people happy,” said Griffin. “I enjoy doing it, I really do.”

by Kelsey Hazlewood
The Arizona Republic