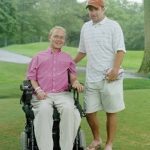 Eleven seconds was all it took to change Travis Roy’s life.

As a freshman at Boston University in 1995, Roy lived his dream of playing hockey for the Terriers, earning a full scholarship after playing two seasons at Tabor Academy in Marion. His dream was quickly shattered when he crashed head first into the boards during his first collegiate game, leaving him a quadriplegic.

Roy vividly remembers the accident and says he has different emotions when he sees the hit.
“I’ll see it and I’ll think nothing of it,” Roy said. “Sometimes I’ll see it and realize how it turned my life upside down.

“The puck dropped into the offensive zone and I went to check the guy into the boards and he moved out of the way – like anyone would do when they’re about to get hit – and I hit my head. I was conscious the entire time and I experienced the absolute absence of sensation in my body. My brain was telling me to get up, but there was no response.”

Thirteen years later, Roy has turned his negative into a positive, raising more than $3 million in the last 11 years through the Travis Roy Foundation (www.travisroyfoundation.org) to help spinal cord injury survivors and help provide funding for a cure.

“I’m hopeful a cure will be found,” said Roy, who has minimal movement in his right bicep. “I actually just got off the phone with one of the top researchers in the world, and there’s research being done where I believe I’ll see advancements in my lifetime. I know it’s going to take time and that’s the hard part. I’m on my 13th year and it is a bit disappointing how slow things have moved, but I remain optimistic.”

Although it was athletics that robbed him the use of his arms and legs, Roy credits his sports mentality with helping him stay positive.

“I’ve never asked why me,” he said. “I’ve been blessed with athletics my whole life and I’m using the same mentality now as I did when I was playing. If you’re down 10-0, you never walk off and hang it up. You always keep going.”

In addition to running his foundation, Roy travels the country as a motivational speaker.

“I have to be productive,” said Roy. “I’m out several times a month giving speeches and trying to make a living. I tell people to establish core values and live by them. I tell people to have pride in everything you do, know you gave your all and didn’t cut corners.

“I talk about love. I tell people to recognize their emotions and to let the people around them know how you feel. I talk about life’s challenges and it’s what you do with those challenges that defines you.”

Roy admits he still thinks of what could have been when he watches a hockey game. His good friend and BU linemate, Chris Drury, is a nine-year NHL veteran, playing for the New York Rangers and making more than $7 million per year.

“I had dreams of playing in the Olympics and the NHL,” Roy said, “and there are always several minutes of ‘this sucks and I wish it was different’ but then I put it away and I move on.”

Despite being confined to his wheelchair, Roy is as independent as he can be, living in his own apartment in Boston. He has 24-hour care from his NCAA Catastrophic Insurance Program.

“I am proud of how far I’ve come,” he said. “I have had a lot of support and I try not to let anyone down.”

Roy knows he does serve as an inspiration to many, and says there are a lot more people worse off than he is and those are the ones that inspire him.