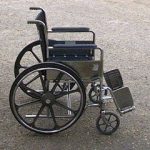 A new study released Tuesday shows roughly one in 50 Americans has some degree of paralysis, which is five times more people than doctors thought are living with a spinal-cord injury, nearly 1.3 million.

It’s a largely hidden population that neither the government nor medical organizations had ever attempted to fully count, and the findings promise to help health authorities understand the scope of need.

“There’s no road map for somebody like me,” said Alan T. Brown of Hollywood, Fla., who broke his neck 21 years ago, just before his 21st birthday. He lost the use of limbs when he was hit by a wave in the ocean off the beach in Martinique.

Now at age 41, this husband and father has been living as a quadriplegic for 21 years. Although he can move his arms, he has no use of his hands or legs. For the last five years, he’s used a $22-thousand Ibot wheelchair that travels in sand, gravel and climbs stairs.

Unfortunately however, the Ibot is no longer being produced because of its high price tag. Years ago, insurance companies paid for 85-percent of it. Now only 10-percent is covered.

Brown was in Washington, D.C. on Tuesday for a very special announcement.

Funded by the Christopher & Dana Reeve Foundation, University of New Mexico researchers designed a survey of 33,000 U.S. households to measure the full gamut of paralysis — how many people either cannot move or have difficulty moving an extremity.

The survey concluded that more than a million more people are paralyzed than previously estimated and more than 5.6 million people live with some form of paralysis due to a variety of neurologic problems. Stroke and spinal-cord injury are the leading causes, but they also include multiple sclerosis, brain injuries, birth defects, surgical complications and a list of other ailments.

“I can’t wait for people to realize and know there are so many more of us that need help. No, it’s not 250 thousand people with spinal cord injuries, its 1.3 million spinal cord injury patients,” said Brown.

Alan and the late Christopher Reeve became friends not long after Reeves’ accident..

“Christopher was always about finding a cure. It was his dream and it was my dream but now I have to live. It’s been 21 years, I need to live. I swim, skydive, snorkel; I do everything, I do everything I can, but it’s becoming harder and harder,” explains Brown.

It’s becoming harder and harder because of the 17 infections he had last year alone and the number of people it takes to care for him and others like him.

It’s more than costly. Alan, who has his own public relations firm, says he hopes these new numbers will show everyone there’s many more people like him than we ever thought before.

“Right now, I’m on a mission for my buddies, the girls and guys who get hurt for no reason and veterans; that they get taken care of. I’ve been working really hard to stay afloat. Now it’s getting harder to stay afloat because the system is squeezing down on us.”

The Reeve foundation plans to use the findings to push for health policy changes, including ending a federal requirement that disabled workers wait 24 months before getting health care through Medicare. Also on its target list: insurance policies that forbid $400 air cushions for wheelchairs until someone’s already suffered a pressure-caused skin ulcer that can require a $75,000 hospital stay.