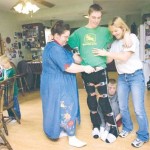 Suffering a broken neck and severe spinal cord injury, David Sparby is determined to regain the use of his legs

David Sparby has been a quadriplegic since Jan. 21, 2006, the day an 800-pound square hay bale fell from a height of 10 feet, breaking his neck and causing a contusion in his spinal cord. “You could feel all of a sudden everything was trickling out of your body, then there was nothing,” David said. He initially was taken by ambulance to Northwest Medical Center in Thief River Falls, then transported to Altru Health System in Grand Forks where he received surgery to fuse the injured vertebrae.

Beads of sweat form on David’s brow as he continues marching toward his goal of someday becoming a Marine. Before he can achieve that goal, though, he has to learn to walk again.

His mother, Tami, who is guiding his feet, and Karen Olufson, his personal care attendant, are working with David on this late April day to make that dream become a reality.

David, 18, is in the first hour of his four to five hours of daily therapy on this Wednesday. Besides Olufson, David also works with a physical therapist who comes to the Sparby farm near Grygla twice weekly. The Sparbys’ house is filled with physical therapy and gym equipment, including parallel bars, an active-passive bike and a glider-stander.

“It takes a lot out of you. I’d never thought it would be so hard to walk,” David said. “If I can get through this, I can definitely make boot camp,” he says, with a grin on his sweaty face. “This is kind of pre-training.”

David has been a quadriplegic since Jan. 21, 2006, the day an 800-pound square hay bale fell from a height of 10 feet, breaking his neck and causing a contusion in his spinal cord.

“You could feel all of a sudden everything was trickling out of your body, then there was nothing,” David said. He initially was taken by ambulance to Northwest Medical Center in Thief River Falls, then transported to Altru Health System in Grand Forks where he received surgery to fuse the injured vertebrae.

During the past three years, David has been to about a half dozen rehabilitation hospitals and private clinics throughout the United States for therapy. From the beginning, he was determined that he wouldn’t spend the rest of his life in a wheel chair.

“I’m not going to give up on everything when I’m so young,” David said. That keeps him going even when the physical therapy is painful. Even physical activities such as walking, that used to be simple, hurt and require great effort now.

“It’s not something I want to do. It’s something I need to do and have to do,” he said. “I have dreams and I don’t want to give up on them. If stumbling blocks get in your way, you’ve got to get over them.”

One of the first hurdles David had to get over after the accident was re-learning how to feed himself.

“It is really embarrassing getting fed,” David said. “I hated getting fed.” He also re-learned how to type and uses a computer to take college courses online.

In between hospital stays and at-home therapy, David has continued his high school education with the help of his mom who home-schools him and his brothers, Briley, 13, and Levi, 7.

David and Tami credit the progress he’s made emotionally and physically since the accident to the support of his family and friends.

Briley helps with David’s physical therapy and Levi is his biggest cheerleader, encouraging his brother and recording his progress on camera. Meanwhile, their sister, Kallie Doughtery, her husband, Travis, and their son, Payton, who live in Moorhead also help out when they come home.

“The whole family has been very helpful,” Tami said. Hers and Jim’s extended families, the Sparbys’ church community and people in surrounding communities also have been supportive, donating aluminum cans to the Sparbys, which they cash in for money to help pay for therapy. The Sparbys have placed dog kennels in several area towns to collect the cans.

Besides feeding himself and working to maintain the muscle tone in his arms and legs, David also has worked to gain strength in his neck muscles.

“When he first got hurt, he couldn’t even hold his neck up,” Tami said. An active, athletic teen before his injury, David is determined to regain the use of his legs.

“My goal is to walk, go to school this fall and take a criminal justice course and join the military.” His mom and his dad, Jim Sparby, a farmer, have supported his goals and always are on the look out for new treatment facilities and methods that will help their son realize them.

An innovative treatment called electro-neuro medullar therapy, practiced by Osvaldo Font de Santiago, a physician from Puerto Rico, has helped David get closer to realizing his goals. Tami heard about the success that Lois Porath, a Perham, Minn., woman who had been paralyzed for more than seven years, had with it. Porath was able to get up and walk shortly after she received the therapy, Tami said.

David received the electro-neuro medullar therapy in Hato Rey, Puerto Rico, in February. The therapy, which was performed over a period of three weeks, involved sticking a needle into the epidural layer around his spinal cord and shocking the area.

After David received the therapy, it was easier to sit in his chair and he noticed a difference when he was walking between the parallel bars.

“I’m glad we took the chance and went,” Tami said. “We’ve been very pleased with it.”

The Sea Inside (Movie)

Adapting to life with a spinal cord injury