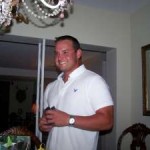 Christopher Crosby can’t breathe on his own or move most of his body.

Somewhere, the 27-year-old has found the spirit to keep fighting for his recovery.

Paralyzed from the neck down in a January accident, the Bradford County man is getting spinal cord injury rehabilitation to prepare him for life back at his family’s farm.

For about three weeks, he has been a patient at Atlanta’s Shepherd Center after a historic surgery at Shands at the University of Florida. Just getting to the Georgia hospital was a battle.

Crosby didn’t have health insurance when he broke his neck wrestling with a friend on the farm. Supporters held benefits aimed at raising $150,000 to pay for his treatment at the Atlanta hospital, which specializes in the care he needs.

But his father, Eddie Crosby, said it was politicians and hospital officials who helped convince Medicaid to cover the cost for the out-of-state treatment. That gave his son even more reason to battle on.

“I told them that I was a country boy and they’re not working me hard enough,” Crosby told his dad about his therapists last week. “I’m used to working from daylight to dark.”

Crosby’s therapy includes learning how to control a motorized wheelchair with his breathing, and how to navigate the Internet with his voice. His doctor, Brock Bowman, said he’s seen in Crosby a good balance between understanding the reality of his situation and hoping for a better future.

“That’s a hard line to find sometimes,” said Bowman, who wears the “Expect A Miracle” bracelet Crosby gave him and others.

For now, Crosby’s goal is to breathe 12 hours a day on the diaphragm pacing system that surgeons at Shands implanted in March. He became the first patient in Florida to get the implant, a book-sized unit that lets him breathe without a weighty respirator. He uses a respirator at night as he builds his endurance toward total reliance on the new technology.

In the meantime, friends and supporters from local businesses are building an extension on his family’s farm house for him. Eddie Crosby said they’re preparing his son’s homecoming in late May. Until then, the patient plans to battle on, determined to win whatever victories he can.

“He told us he is not coming home on a respirator,” Crosby’s father said. “If he can only accomplish one thing, it’s to breathe on his own.”