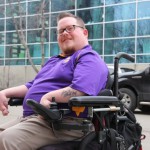 When TappCar launched Monday, their fleet of dozens of cars included three capable of transporting people in a wheelchair.

But there’s a hitch: TappCar’s wheelchair-compatible vehicles are more expensive, costing the same as a van, or about $6.75 more per trip than a standard car.

“To have one extra choice of something like TappCar, where they have gone above and beyond what Uber has offered, is good,” he said.

But Weeks said paying more — which he isn’t legally expected to do in a regular taxi — “isn’t ideal.”

Ryffel said the higher prices reflect the increased cost of operating an accessible vehicle. Set up costs are higher and the vehicles are heavier, so burn more gas.

TappCar is open to dropping the price once the business is up and running, he added.

“People who use wheelchairs often have fewer options with regards to transportation, so definitely we’ll be keeping an eye on that,” Ryffel said.

Betty MacIsaac, also with Spinal Cord Injury Alberta, said transportation options for people in wheelchairs are so limited that more options are welcome, even for an increased fee.

“As a person with a disability you don’t want to pay extra,” she said. “But, on the other hand, you’re kind of caught between a rock and a hard place. If you can’t get a cab you will pay extra, whether that’s right or wrong.”

Coun. Dave Loken said the concern over added fees is another reason he’s happy the bylaw will be reviewed.

“I’ve said all along that this bylaw is weak, and I’m glad it was council’s decision to review it, once we get it going.”

Under city bylaws, taxis aren’t allowed to charge people using wheelchairs more. Each taxi company dispatcher is also required to have an accessible vehicle available at all times.

The city has stated in the past the accessibility fund will be used to help defer costs toward making further taxis accessible to people with disabilities.

With some help from her friends