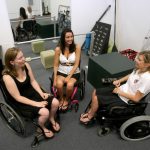 After rescuers used the Jaws of Life to pry Amanda Perla from a car that had slammed into a traffic-signal pole on prom night, doctors told the 18-year-old she would be paralyzed but could go on to live a productive life.

They would teach her how to put on makeup. How to brush her teeth. How to feed herself.

So last week — exactly two years after the accident — Amanda’s mom, Liza Perla-Riedel, opened the nonprofit Step It Up Recovery Center Inc., in Sanford for those with spinal-cord injuries. The controversial exercise-based program attempts to “reroute” the nervous system through physical stimulation. Its creators say it can help those with spinal-cord injuries regain function beyond what was considered possible and perhaps even walk again.

“We don’t want to hear about ‘adaptive’ therapy. These kids can do a lot more than learn to live in a wheelchair,” said Perla-Riedel, who worked as a medical coder in Ocoee before she took on spinal-cord-injury recovery as a personal cause. “I’ve seen it with my own eyes.”

One of only five facilities in the country to use the approach, Step It Up offers new hope for spinal-cord-injury patients — an estimated 3,500 in Florida and more than 1.2 million in the United States.

But skeptics say the program offers false hope to patients who have little chance of regaining their abilities.

“The general feeling has always been, after spinal-cord injury occurs, the cat’s out of the bag — there’s little you can do,” said Garrett Riggs, a neurologist at University of Central Florida’s College of Medicine.

But that is starting to change, Riggs said.

Although the data are inconclusive, he said, several studies show that some spinal-cord-injury patients can benefit from intensive physical and occupational therapy, helping them gain strength and mobility.

“The real key is how this translates into real everyday experience,” Riggs said. “Some patients recover a little, some recover more — that makes it worth looking into.”

Amanda had just left a prom after-party in Port St. Lucie when her friend, who was driving, fell asleep at the wheel. Their car hit a concrete median, struck a traffic pole and rolled down an embankment. Amanda was taken by helicopter to St. Mary’s Hospital in West Palm Beach, then to Orlando Regional Medical Center, then to the Shepherd Center in Atlanta.

“I was flown in a basket, like for dead people,” she said.

Then she and her mother heard about Project Walk, a Carlsbad, Calif.-based program. Perla-Riedel learned everything she could about the aggressive exercise regimen.

Soon, she and Amanda left their home in Maitland and headed for California, organizing golf-tournament fundraisers to pay for Amanda’s weeks of treatment.

“The first thing that struck me is they don’t treat you like you’re paralyzed,” said Amanda, who became a quadriplegic after the accident, with some control of her wrists and hands. “The minute you get there, you’re out of your wheelchair. They make you crawl if you have to. You think, ‘These people are nuts.’ Then you see people using their triceps, moving their fingers. You realize it’s like boot camp for spinal-cord-injury patients.”

‘I couldn’t even sit up’

Dana Guest of Dade City was on her way to Busch Gardens to meet her family for a day at the park six years ago when her life was forever changed.

“It was a Saturday morning. Blue skies. No clouds. I remember my feet crunching on the grass on my way to the car,” said Guest, 26.

It was the last time she would feel her feet touch the ground. She was stopped at a red light when a Mack truck hit her car from behind at 55 mph. The impact shattered her vertebrae. She was airlifted to a Tampa hospital and was there a month and a half.

“My insurance was running out, so they released me,” Guest said. “I couldn’t even sit up.”

A number of other hospital stays followed, but problems with insurance coverage continued.

“Standard health insurance only pays for short-term physical therapy; you get the same limited number of visits whether you broke your ankle or broke your neck,” Perla-Riedel said.

But it wasn’t just the limited number of traditional-therapy appointments, it was also the approach that turned Guest off.

“You’re told to work with what you’ve got. Don’t even look back at what you’ve lost,” Guest said.

She had heard about Project Walk from her circle of friends and then learned that a facility would be opening in Central Florida. She signed up as soon as she could.

Tara Barzak, a physical therapist at Orlando Health’s outpatient rehabilitation clinic, said traditional therapy is not that different from the Step It Up approach.

“It depends on the level of injury, but we also incorporate exercise in our therapy to help patients regain muscle and improve bone density,” Barzak said.

For Malerie Murphy, that’s the big difference between traditional therapy and programs such as Step It Up.

The program stresses repetitive motion and uses electrical stimulation and other techniques so that patients who have lost their ability to move their limbs can mimic certain motions, as if they were able-bodied again.

“Basically, the most important aspect of our work is that we’re training the nervous system, not the muscle,” said Murphy, a physical therapist at Step It Up.

The Sanford facility has equipment found in a typical gym, only altered to serve the special needs and abilities of spinal-cord-injury patients. On a stationary bicycle, a backrest is added to better support patients. The bikes are automated so that users can go through the motion of riding, using their hips and legs.

Fees to use the facilities are $100 an hour, $250 for three hours. Patients typically spend two to three hours a week in therapy.

Perla-Riedel said patients, who come from all over, can learn the program’s techniques and do their therapy at home.

Murphy was excited about the progress Amanda already was making.

“She felt her left leg for the first time. She could feel a sensation all the way up her leg. It was an emotional time for her,” she said.

“But we’re not going to give up trying. That I do know.”

Fernando Quintero can be reached at fquintero@orlandosentinel.com or 407-650-6333.