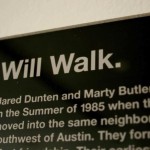 In a unique mixed media collaboration shown at the Bass Concert Hall, Jared Dunten and Marty Butler challenge the viewer to intimately experience their journey that began under the big skies of West Texas. A journey both crushing and liberating that still continues today. The two cheated death and began their fight against paralysis.

April 2000 Jared and Marty were on a backpacking trip in Big Bend National Park. After several days of hiking in the Chisos Mountains they sought refuge in the tiny border town of Boquillas Del Carmen. A snap decision by Jared to dive into the Rio Grande River left him paralyzed. Marty had saved Jared’s life.

April 2009 A collaborative show is created that spans the nine years since Jared was paralyzed. These works chronicle the event that changed their lives and reveal where they are today. 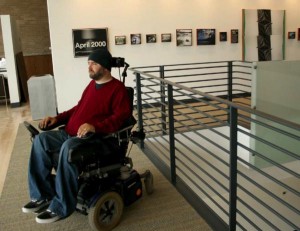 It is a bold statement to the world that paralysis will be overcome. The first part of the show is focused on the West Texas trip and the days immediatly following the accident. These thirteen mixed media works employ a blend of photography, digital and hand rendered typography, as well as acrylic and oil paint on the canvases. Marty’s travel photography (Polaroid and medium format) and hand written journal entries were scanned and produced as giclee prints on canvases. Jared and Marty worked together on each of these pieces. They selected images, wrote copy and applied the paint. This was both a fruitful creative exercise and a symbolic gesture for the collaboration that will be required to end paralysis. 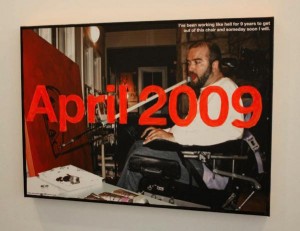 The second part of the show begins with a photo portrait of Jared painting taken by his wife Kimberly just this year. The portrait is printed on canvas and has April 2009 painted over the image. It is a clear and startling record of how Jared is forced to paint as a paralyzed quadriplegic – using only his mouth. This portrait is followed by four of Jared’s painted canvases: a portrait of The Virgin de Guadalupe, a portrait of his wife Kimberly and two large flower paintings. Each painting was carefully selected from the hundreds of works Jared has created over the last five years for its subject matter and style. They are all oil on canvas. 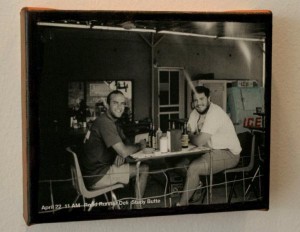 The final piece in the show is a giclee print on canvas of a photograph taken by Marty of Jared walking just a month before he would be paralyzed. The image details Jared dramatically striding through a farm field near Austin. It is a powerful and singular reminder of what has been taken from Jared and hundreds of thousands like him. Over the top of the image Jared has painted I Will Walk – defiance and hope spelled out clearly in bright red paint.

This show is the beginning of what Jared and Marty envision as a much larger collaboration. One where the world’s most influential artists join with them to create works not only for the sake of the over 450,000 American’s living with paralysis from spinal cord injury but the world. The time is now to fund research that will quickly lead to an effective treatment to end paralysis.   Together, we will create this end

Learn more about Jared Dunten and his artwork at www.jdunten.com

Outfitting Your House for a Child With a Disability