Suddenly disabled, D’Andrea invests his money in hope and ‘trust’ 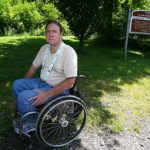 Dan D’Andrea is young enough and hopeful enough to believe that, yes, he might someday walk again.

And he’s betting a million dollars on his chances.

“I want my old quality of life back,” D’Andrea said. “I want to walk again.”

The former construction worker, paralyzed from the chest down in a 2004 construction accident, is starting the Daniel D’Andrea Charitable Trust with an eye toward the funding of promising new stem cell research into spinal cord injuries.

Of course, D’Andrea is hedging his bets a bit — and is the first to admit it –by targeting a second cause — better access for the disabled to parks and public buildings.

“Even if I’m stuck in this chair, I want a better quality of life,” he said last week from his home in Amherst.

The trust is D’Andrea’s way of helping others while trying to realize his own dream of walking again.

In December 2004, D’Andrea was working at the old Holling Press building, the site of one of downtown’s first housing rehabilitation projects, when a large piece of scaffolding fell from above and landed on his back.

The young construction worker, in the midst of starting his own contracting business, found himself in a wheelchair instead.

“I pretty much lost my life that day,” D’Andrea said in a 2007 Buffalo News article about the accident.

Two years later, he’s fighting back and using part of the multimillion-dollar settlement he received from the accident — the trust is $1 million and growing — to finance his two favorite causes.

“Dan is a special man,” said Bruce D. Reinoso, a Buffalo estate and trusts lawyer who will serve as D’Andrea’s co-trustee. “This is important to him personally, but it’s also his way of helping others.”

The trust was formed last year and will give out its first round of grants later this year. And if D’Andrea’s current passions are any judge, stem cell research will be one of his funding priorities.

Now 40, D’Andrea is young enough to believe that a cure for his spinal cord injury may be found someday. And like many scientists, he views stem cells as the most promising type of research currently under way.

D’Andrea’s goal is to spend most of the foundation’s money in Western New York. But when it comes to spinal cord research, Craig Hospital in Denver holds a special place in his heart. Craig is where D’Andrea spent much of his rehabilitation.

“At the very least,” he said, “we need to raise awareness about the value of stem cell research.”

His other passion, the one that may not help him walk but could help him fish again, is improving access to Amherst’s town parks.

A frequent speaker at Town Board meetings, D’Andrea has put Amherst on notice that its public spaces are lacking when it comes to access for people with disabilities.

“They’re breaking the law,” he insists.

D’Andrea is persuasive enough that Council Member Shelly D. Schratz appointed him to the Amherst Committee on Disabilities, an advisory group with the responsibility of improving town compliance with the federal Americans with Disabilities Act.

“He’s 100 percent right,” she said of the parks’ lack of accessibility.

For D’Andrea, the battle over access is really a battle between right and wrong.

That and his right to go fishing.

An avid angler, D’Andrea often puts his push for better access for the handicapped in terms that any fisherman can understand. All he wants, he says, is the ability to get to the water’s edge so he can drop his line in just like anyone else.

“It’s not fair,” D’Andrea said of his lack of access to town parks. “It’s like riding in the back of the bus. You might as well poke me in the eye with a stick.”

Not everyone is on board with D’Andrea’s campaign, in part because of concerns about an all-terrain vehicle that the town initially gave him permission to use.

When conservationists complained about park damage they attributed to D’Andrea’s ATV, the town let his permit expire.

As a member of the town committee, D’Andrea views the Americans with Disabilities Act, the federal law he’s being asked to help enforce, as simply the latest step in disabled people’s quest for justice.

“That law isn’t the end,” he said. “It’s just one piece of the puzzle. It’s just one brick in the foundation. Now it’s time to add our own brick.”

A big part of that brick, or at least D’Andrea’s part of it, is the trust.

He continues to funnel his own money into the fund, and the goal, over time, is to recruit other contributors so the trust can grow, in terms of both wealth and influence.

For D’Andrea, it’s his way of fighting back against an injury that left him paralyzed and the forces that stand between him and as normal a life as possible.

As president of the Community Foundation for Greater Buffalo, Dedecker oversees hundreds of trusts, many of them created by people such as D’Andrea, people passionate about a specific cause.

“We have 800 funds,” she said, “each one with a wonderful, personal story about charitable intent.”

Like so many others, D’Andrea is trying to make a big difference in his small corner of the world.

“People always ask me why I do this and why I don’t spend my free time somewhere warm like Florida,” he said. “Well, if I can make the Town of Amherst more accessible for people like me, I’ll feel like I accomplished something. That’s why I do it.”

The warm confines of Florida will have to wait, it seems.