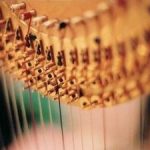 CHICAGO (WBBM) — For 39-year-old George Flores, harps are his life.

“I’m not the guy that plays the instrument, but I am the person that makes sure that instrument performs,” Flores said.

But it wasn’t always that way. He was a hardcore rock and roller with plenty of energy to spare, until a fateful night 5 years ago, when he was paralyzed in a motorcycle accident.

“I ended up in four feet of swamp grass laying there bleeding and dying with a spinal cord injury.”

It took Flores two years to get out of bed and realized he needed to learn how to live his life differently.

“Once I kinda made a peace with myself and decided to live that, you know, I kinda, I knew things were going to be alright.”

Now, the only disabled harp technician in the world, he uses a special wheel chair to repair the six foot instruments.

“Basically locks you off at the knees, and has two levers on the side of the wheelchair that actually lift you up and put you in a standing position.”

Music is still a big part of his life, but he says now, he’s found a new purpose.

“Being one of eleven to fifteen men in the world, and then the first person in history to be able to reach the instrument with a spinal cord injury, carries a little bit of weight.”

An advocate for the disabled and for adult stem cell research, he uses his new-found celebrity to make a difference.

“I set a goal, early, that one day I would touch the top of that instrument. That day is here, that day is now, however, it was a long road to get to this point.”

And even though he no longer has the use of his legs, his hands still allow him to fix his harps and his voice allows him to make a difference.

“As long as I had my big mouth, I had some important things to do,” Flores said.

As the only disabled harp technician in the world, he’s now in the Guinness Book of World Records.