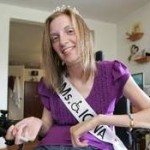 Cambridge, Ia. – Turn into their driveway, just past the alfalfa and hay field a mile south of this Story County town. Walk past her older brother’s muddy Ford F-150, up the accessible wooden ramp, and into the home where Angie Plager has lived for most of her 26 years.

“You mind if I sign a photo for you?” she says immediately, flashing her lively blue eyes as she whips out a photo and Sharpie.

Clearly, Angie is ready for visitors. She wears the same tiara and sash – emblazoned with “Ms. Wheelchair Iowa 2009” – that she’ll wear at today’s “Day at the Races” event at the Iowa Speedway. There, Angie will welcome more than 50 other Iowans in wheelchairs to a behind-the-scenes tour of the Indy Racing League event, sponsored by the Sam Schmidt Paralysis Foundation, an organization founded by an IndyCar driver paralyzed in a practice-run crash in 2000.

But now, it’s time for Angie to tell her own story.

Not long ago, she was an active, ebullient 20-year-old: a Ballard High School graduate who’d acted in musicals like “Annie” and “Godspell,” a lifetime member of First Church of Christ in Ankeny, a Des Moines Area Community College student who wanted to become a travel agent. She loved to volunteer: planning blood drives, mentoring youths, volunteering for Special Olympics. Somehow, she worked part-time jobs so she wasn’t saddled with college loans.

Then, early in the morning on Aug. 23, 2003, Angie was driving home from a friend’s house. She was going north on Interstate Highway 35 when … well, she doesn’t remember the collision. She wasn’t drinking or doing drugs; something happened, and her car ended up under an 18-wheeler.

She remembers screams, then looking down at her sandals: black flip-flops with butterfly buckles. “Why aren’t you moving?” Angie thought.

Two months and one day later, she returned home from the hospital in a wheelchair. She was a quadriplegic, meaning she had full or partial paralysis of all four limbs. Her C-5 spinal cord injury meant she could move her arms and wrists, but not her fingers. The day after she got home, Angie turned 21.

Nearly six years later, Angie sits at her mother’s living room table. She’s over the depression from the months after the injury. Now, paralysis doesn’t stop her; it just slows her down. Like every morning, when it takes Angie and her caregiver two hours to get ready. 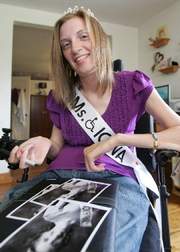 “Nothing is normal anymore,” Angie said. “It’s just a whole new way of living. It can be hard, but it’s also awesome. I get to meet awesome people like Sam Schmidt. I can help other people improve their quality of life. That’s why I’m here …

“God has a plan, and we’re just learning it.”

Angie volunteers as president of the National Spinal Cord Injury Association of Iowa, and she wears her tiara and sash in parades around Iowa. She’s learned not to judge others; after all, people often see Angie in her wheelchair and assume she has cognitive disabilities, and that drives her nuts. She uses a “typing aid” – like a finger that she attaches to her hand – to type e-mails or dial phone numbers. She drives an accessible van, and she’s been water-skiing and jet-skiing.

Next step: start a career. What sort? She still wants to be a travel agent. Only now, she wants to start a travel agency that caters to people with disabilities. She’s writing a business plan now.

“I want to show people just because you have an impairment doesn’t mean you have to stay in your house all your life,” Angie said. “You can still live your life and go experience the world.”